By Pat Connelly and Mariette Ferreira
The great bit about cold water diving is it makes you appreciate how warm a drizzly day in March in the really is once you get out of the water. 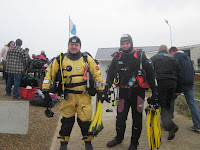 With this in mind 12 hardy souls gathered at the lake at 9am for a morning of character building training and kit testing; whilst everyone was kitting up those with dry suits explained to those in wetsuits the water would be warm enough to take your breath away. The computer as well as various body parts confirmed it was a refreshing 8 degrees.


Colin who turned up with a note from himself claiming to have a cold was pressed into keeping the dive log and duly noted everyone’s times and declared he would be on the next one. 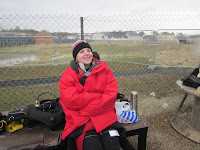 There were a number of other divers at the lake and we were the second group in.  Fortunately the visibility was not bad provided you kept off the muddy bottom and our divers in there pairs began a tour of the lakes attractions.  These included several small boats, a transit van, some large tyres and a couple of training platforms which were used for various training exercises.


The conclusions from the first dive were that Peter now thinks the pool is warm; Richard is looking up the ‘How to fix leaks in Joe’s old suit’ course whilst everyone else appreciated the cuppa the dive centre rushes into your hands as you come out of the water 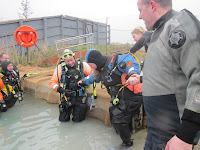 After a break for refreshments the second dive was conducted repeating the tour and completing further training concluding a successful first outing of the season.


-     Steve & Richard - Went well. Richard was comfortable and competent in the water, but could probably work on his kit-up time.


-     Victor & Pat - Victor practiced DSMB deployment and distance line use, which both went well.  Victor was appointed as Assistant DM and efficiently delegated all his duties to Colin. Future Club Chairman in the making! 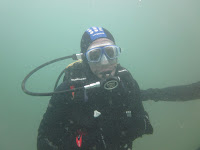 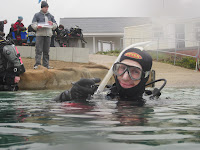 We have another session booked for 24 March at Buckland for anyone needing open water training or would just to like a shake down dive before we start diving for the year to make sure all you kit still works.
Posted by Brett Parker at 16:58