by Kim Thomas and Pat Connelly

The day started sunny, but still quite cold outside with the external temperature sensor on my car reading 4 degrees C at 8am, when it was time to set off. However by the time we all arrived in Shoreham at 9.30, the sun had risen far enough in the sky to start improving the outside temperature.

It may have seemed like an April fools day joke when it appeared on the dive calendar but the day turned out to be anything but.

The Buccaneer is a new destination for us, and based at the Sussex Yacht Club in Shoreham along the coast between Brighton and Worthing, and a different part of the South coast to our usual haunts giving the chance to try some new wrecks. It isn’t a large boat, with bench seating on one side only. It became clear why the skipper limits the boat to 8 divers. In fact we were only 6, so we were able to test out the boat with relative ease.

Parking is “wherever you can between the boats”, with 2 trolleys available to transport kit down on to the pontoon and then onto the boat. “Ropes away” was at a leisurely pace at about 10:15 with tea and coffee being handed out. We met at the civilised hour of 10am, parking was right by the pontoon, and the sun was shining and the sea flat calm all day. 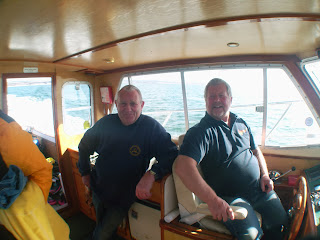 It was a “blast from the past” for Kim. The skipper Chris and his crew Dave were members of Brighton BSAC when he was also a member, so it was great to see them again after some 23 or so years.

We were given the safety briefing before we departed, including how to use the head and where the O2 set was….. We were also briefed on the skipper’s routine for the anchor. He uses a grapnel, and the first pair would use a piece of string at the end of the rope to tie the anchor line to the wreck. They would then unhook the anchor chain and send it up on a lifting bag. The subsequent pairs would come down the tied off rope.

The dive pairs would be Kim/Ken; Pat/Victor; with Barry and Maggie diving together. 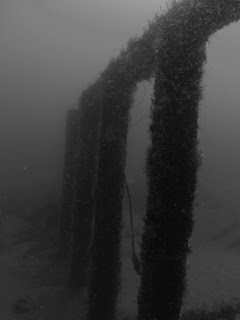 After a short steam out we kitted up for the first dive on the “Pentrych”; sunk by U-Boat torpedo in 1918 in 21m of water. Jumping in with usual anticipation we were not disappointed. The first thing we all noticed on the “Pentrych” was the amazing viz which was well into double figures. You really could wander off and still see your buddy. With amazing viz you could really see the splendour of this wreck. It was stocked with plenty of fish life which with the sun shining offered some good photo opportunities. The wreck itself is broken up with the boilers exposed, ribs standing up in a few places and plates scattered about. The wreck is small enough to go around it twice in the 40 minute dive the viz being so good you could recognise where you were on the wreck

After a short surface interval we dived on the inshore wreck of the “Miown”, a concrete barge. This was a trip down memory lane for Kim as this was his first ever sea dive in 1985. The wreck is very broken up and not really recognisable as such, with a few plates and lumps of concrete forming a new reef. The tide had turned and visibility was reduced to about 3m, life on the wreck is more of the small variety, starfish crabs and fan worms. After half an hour we called it a day and surfaced. 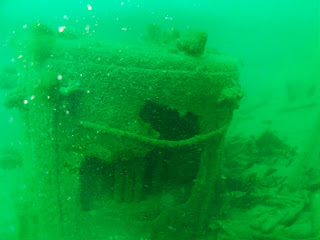 Once back in port a post dive de-brief was held in the conservatory of the yacht club where we all agreed that on April fools day the joke was on those who thought it was too early in the season as we had enjoyed what will be one of the best dives of the season.
Posted by Kim Thomas at 06:43