The BTW is a day long course to help divers understand and improve their buoyancy skills, the idea being that once buoyancy is second nature when deploying a DSMB mid water or holding a stop. 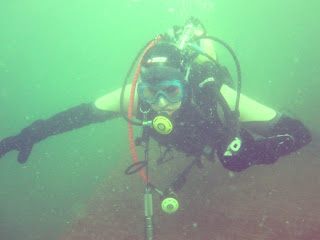 Having stayed overnight a couple of miles away, I arrived at Vobster Quay at 8.15 to discover the gates were still closed and a queue of a dozen or two cars ahead of me. Eventually I as let in, handed a plastic tag to use instead of money, and parked down near the water. This was my first visit and I was impressed, mostly because the water is close to everything including the parking.


Asking in the shop I was pointed upstairs to a classroom where Martyn Bowie and various instructors from Southern Region were hanging about. Gradually the rest of the students appeared. They were a mix from new Ocean Divers through to Open Water Instructors and people with more than twenty years diving behind them. We soon got going with a couple of hours of lectures covering the symptoms of bad buoyancy, getting weighting correct, use of bcd vs drysuit and how to adjust your angle in the water (trim) by adjusting kit.


There were twelve students and four instructors so about 11.30 we were split into groups of three students. My task loading was reduced by having both my fellow students called Caroline, I made up for that by diving a configuration I’d never tried before. Since getting a new suit and wing it was the first time I’d dived a single cylinder. I literally had no idea how much lead to use so once we’d been briefed I got in quickly to check whether I had enough lead to get down. 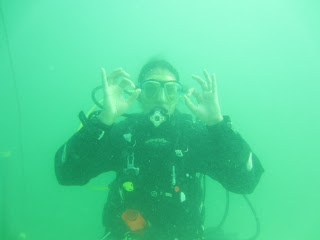 Then we were off for the first dive which concentrated on seeing how our control and trim were to begin with and a couple of exercises to see what needed work. This involved some hovering and keeping still by a small winglet on a sunken plane and then later seeing how we rolled when getting neutral and the keeping arms and legs completely still. Following those we stopped a couple of times on the way up with a proper stop at 5m. This is where my new suit got the better of me. Rather than being nicely horizontal I spent half the stop with my feet pointing at the surface partially upside down! This wasn’t any fun but since I didn’t have an excess of gas in my suit I wasn’t at risk of disappearing skywards but got to practice rolling out of the inversion.


The last part of this dive was to dump the gas from our cylinders and do a weight check, making sure we could stay down in 3m with a nearly empty cylinder.


Once out of the 5C water it was time for a hot drink, some food and some analysis of our issues. One of the Carolines had been being rolled over by her pony cylinder and moved her lead about a bit. I lost a couple of kg of lead from my belt and replaced it with ankle weights hoping to be better able to stay horizontal. 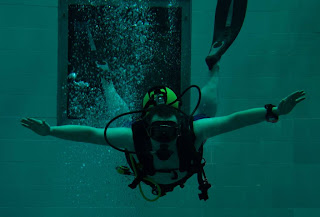 Due to the cold it was agreed that the second dive would be as quick as would cover the evaluation. Thus the dive consisted of a lot of hovering. We trried to keep different stop depths within a narrow band while not having to fin or wave arms about. Once that was over Caroline and Caroline abandoned us, allowing me to redo some horizontal hovering to see how the ankle weights had helped. Finally I spent three minutes dumping 100 bar from a 15l at 4m to be sure I still had enough weight to stay down. Being forgetful I did this in one long purge so managed to freeze the first stage. James has my reg to fit a cold water kit now.


Once out the first priority was to get warm again. Luckily Vobster has the best changing space I’ve encountered, both warm and dry. Then it was debrief time. Caroline was much happier having fixed her rolling problem and Martyn was happy that we had all met the required standard. In fact all twelve students had met at least the ‘Gold’ standard of +/- 0.5 m which is required for courses such as Advanced Decompression Procedures.


This was a very good course. It was very helpful to be able to just concentrate on this one fundamental aspect of diving that is so important for how relaxed you feel in the water.


http://www.bsac.com/page.asp?section=3602&sectionTitle=Buoyancy+and+Trim+Workshop
Posted by Brett Parker at 13:34