White water rafting is more or less the same thing as scuba diving (minus some of the equipment), so the club ventured up to the northeastern edges of London to visit the Lee Valley White Water Centre, one of the retained Olympic legacy venues. Clive organised the trip. 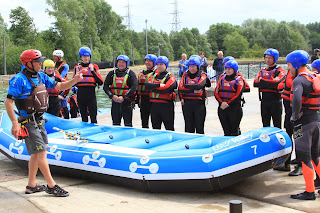 We arrived half an hour early to check in, were issued with wetsuits, boots, helmets and PFDs, and were split into 2 groups of 7 people, each with an instructor. After a briefing and an optional first dip in the lower pond, we all had to jump in and do a swim test in the rapids, which was great fun and which Ben referred to as "sick" (youthspeak for "good"). We then received instruction on how not to fall out of our inflatable rafts (and how to climb back in if you do), learnt which end of a paddle went in the water, and began our circuits of the Olympic slalom.

Eamon took Georgi, Maria, Ross, Steve, Ben, Victor and Daniel, and gave us 5 runs, each time adding something more challenging like riding the surf that powered through the human-made channels. It wasn't long before someone fell in. Some managed it more than once, and Ross even achieved a half circuit of the course without a raft underneath him. Everyone was safe, though, given the equipment we were issued with, and the several members of staff that lined the route to help people who had become detached from their rafts. 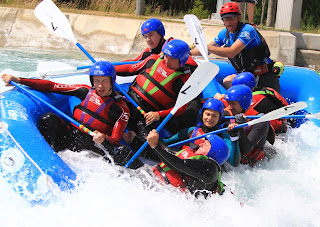 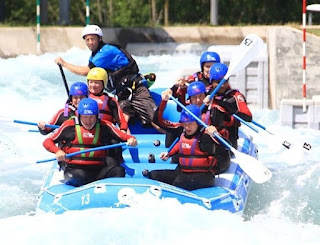 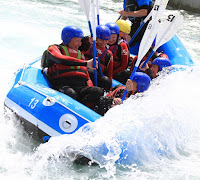 The other group, comprising Maggie, Teresa, Sally, Sara, Vinay, Clive and Colin, claimed to have had nobody fall in, which obviously cannot be true. Another group - not linked to the talented rafters of Bermondsey BSAC - saw their raft capsize, leaving the whole group clawing their way to dry land as we cruised by with most of our group still on board. We sympathised.

The venue is incredibly well designed, and enables efficient kitting up and briefing. There are lockers, and a cafe upstairs overlooking the slalom, where we debriefed later on. An on-site photographer hovered. Paths all around the site enable spectators to come and watch people like us master the art of rafting (or falling in). The cost was £50 per person, and groups of certain size receive a bar voucher.

Brilliant day out. Thanks, Clive.