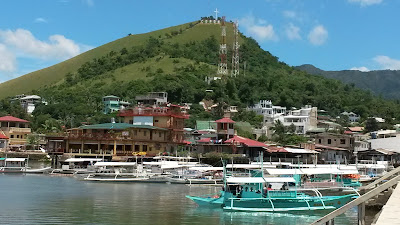 Travelling all that distance to Taiwan made it worthwhile taking a 2 hour, 20 minute flight to Manila for a week in the Philippines. Travelling down to Coron Town on the island of Busuanga, the plan was to do some dives on the many WWII wrecks in the surrounding waters. I booked these dives with Neptune Dive Centre (http://www.neptunedivecenter.com/). I stayed at Jazmine’s Place (http://www.jazminesplace.com/) which was cheap and OK, but there are probably better accommodation options available. 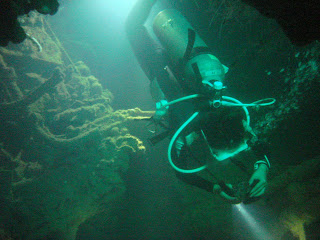 An early (7.30am) start on the Wednesday began with analysing and labelling our cylinders. Neptune have a good system – the dive leader (Tan, who is brilliant) made sure we had analysed and noted our % O2 and MOD ourselves, and had written these (with our names and dive number) on a yellow and green sticker on each cylinder. Neptune also kept a record of what % O2 we were using. Briefings before each dive were illustrated and very clear – they had to be, as we would be penetrating wrecks. Down at the harbour we boarded a bangka named Kuracha, which had plenty of space and cover, and 6 crew (including dive centre staff) for 5 customers – a ratio I’ve never seen before. There was a constant supply of soft drinks all day, and the boat had a head. I dived with Han and Keli, 2 excellent divers from China, and we were led by Tan. 2 other less experienced divers stayed at shallower depths with another instructor and didn’t enter the wrecks. 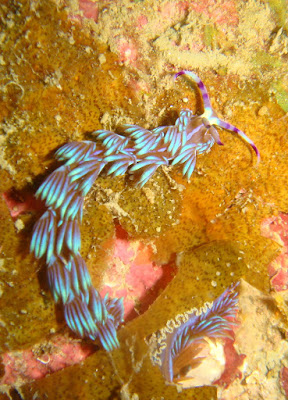 The first dive was the Akitsushima, an Imperial Japanese Navy seaplane tender sunk in 1944. This is some distance to the west of Coron Town. We reached depths of 32.6 metres and dived for 45 minutes, entering the wreck and passing through various parts of the interior. After lunch we dived the Okikawa Maru wreck (a Japanese oil tanker, 168 metres long, with several long purple-and-blue aeolid nudibranchs on the deck) for 56 minutes. We reached 24.7 metres. We finished the day on the Morazan Maru wreck, an English-built cargo and passenger ship where we moved through a couple of fairly narrow holes to see inside tiled shower rooms, cargo holds and other spaces.  We got back to the dive centre at about 6pm. All 3 dives today were great – although I’m not normally mad keen on wrecks (or entering them), these were impressive, relatively intact, supported a decent amount of wildlife, and – inside – were very atmospheric where the outside light entered via portholes and rusty openings. Visibility wasn’t fantastic – no more than 5 metres (I read later that this is due to local agricultural run-off), down to 2 metres inside parts of the wrecks. Other than close-ups, my photos didn’t turn out so good. 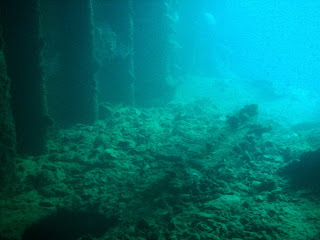 On my second and last day of diving I turned down an invitation to dive a wreck on the north side of Busuanga where apparently 20 metre visibility is guaranteed. The cost, early start, and jeepney journey across the island didn’t seem worth it for 2 dives. Instead I did another 3-dive daytrip on the south side of Busuanga, this time from the boat Dhel, a smaller (but big enough) bangka which took us to the Olympia Maru wreck. Unfortunately, although I had understood we would be diving on air today, nitrox was brought out to the boat, and yesterday’s analysing and labelling of cylinders wasn’t repeated due to there being a bit of a rush at the dive centre in the morning. I hadn’t analysed the gas myself, I wasn’t certain that the “36%” written on masking tape on my cylinder was accurate, and there was no analyser on the boat, so I proceeded with caution, and – with the agreement of the other diver who also had concerns about depth and penetration – stayed at depths shallower than the MOD for 36% O2. This meant we did not enter any wrecks today, which was fine, as there was plenty to see on the outside, including bat fish and many lion fish. 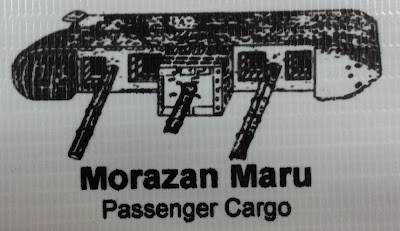 We then had the best lunch I have ever had on a dive boat – an amazing sweet potato curry cooked on board by the skipper.

The second dive of the day was on the wreck of the Kogyo Maru, a large supply vessel lying on its side. Of course, on the day that my camera battery had run out, photogenic wildlife was out in force, including 2 fat nudibranchs with purple, white and yellow bodies in a well-lit, accessible location with little current. Lion fish and scorpion fish were also seen. It was on the third dive of the day, however, that I really regretted not having a useable camera – on the “Coral Garden” drift dive along the southwest side of Lusong Island we saw a huge variety of coral, and at least 4 different species of nudibranch, in a variety of colours and shapes. Brilliant dive.

These 6 dives were very good, Tan was a particularly good dive leader, my rented dive kit was decent enough, the weather was fine, and water temperatures (mostly 29 degrees, up to 33 at the surface) were lovely. The dives plus kit hire and lunches cost me 9,000 pesos (£126). I’d come here again, and would dive with Neptune again, although a liveaboard may be a good idea, so we could access the further-out wrecks/reefs where visibility is apparently better. A dive on the Irako wreck, and dives on reefs where sharks have been seen, would also be good.