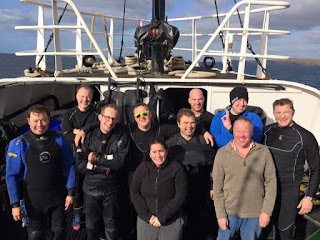 A successful week's diving from the MV Valkyrie out of Stromness. 12 dives were done over the week, with the vast majority of the 10 of us on board partaking in at least 11 of them. The sites included the “big seven” - the cruisers:  Brummer, Karlsruhe, Dresden and Coln, and the battleships:  Kronprinz Wilhelm, Konig and Markgraf – as well as some other wrecks (the F2 and AATCPPs among others).

Victor and I travelled up by hired van with all the kit. We departed Thursday afternoon (after having spent the morning collecting the van and kit from Amphibian, Victor's, Daniel's and Ken's) and arrived in Stromness around Saturday lunchtime (having met Brett in Inverness the night before for dinner) some 760 miles later. Having arrived we extracted some of the kit from the van and started piecing together Victor's twinset that he was borrowing from the boat. His kit was an amalgamation of his own, the boat's, mine, Colin’s and Ken's – a true group diver! The crew welcomed us onto the boat and got us to make ourselves comfortable. Under no circumstances were we to go into the lounge in drysuits. Understood! We let the tide come in for a few hours (so the boat would be closer to our vehicles) before emptying the van. The three of us (Brett, Victor and I) headed out for dinner at the local Ferry Inn. Later that evening on the boat we were joined by Andy and John from Nottingham and Coventry – our non-club fellow divers for the week. 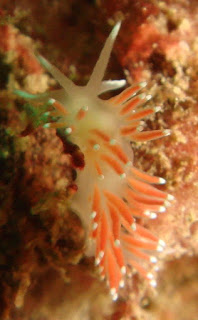 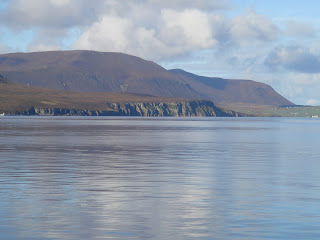 Sunday morning Brett, Andy, John and I did a shakedown dive on the Karlsruhe. The rest of the group – organiser Ken, Jill, Geraint, Chris and Lee – arrived late at Sunday lunchtime because of flight cancellations. At least they got to see Southend airport! 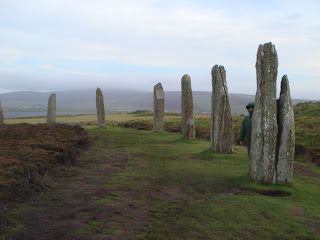 A quick boat safety briefing from skipper Hazel and some manic running around and kit faffing and we were heading out again to do a dive on the F2 and YC21 barge. John, Andy, Brett and I went in looking for the Mara (which we found) and then proceeded to swim against the current for 35 minutes looking for the F2. Won't be doing that again. Saw a nice dog fish on our travels, though. The YC21 was visited again at the end of the week, and turned out to be Victor’s favourite dive site, largely due to the resident nudibranchs.

• the food!
• the crew
• the suit lube dispenser
• dancing with Brett before one of the dives
• the food!
• diving the Markgraf (even if I was narked off my tits)
• the warm water to dunk gloves and hoods into before each dive
• the food!

• singing along to power ballads while kitting up on the dive deck
• completing Dive Leader!
• Chris completing Accelerated Decompression Procedures
• putting ADP to good use
• seals
• nudibranchs
• swimming through the Konig's boiler room
• the food!

Jill took photos underwater, Chris did the ADP course with rebreathing Ken, some of us went Northern Lights hunting one evening (they didn’t come out to play, but the stars were amazing), Victor’s DSMB was confiscated by another dive boat, the water was 13 degrees all week (1 degree warmer than the club's lake dive the following Sunday!), we hit our target of 60-sites-in-2016, visits were made to Stenness, Brodgar and the Italian Chapel, a certain diver entered the water without fins (no names will be mentioned here!), and we went for a decent Chinese with the crew in Kirkwall on the Friday night. We also had a sneak preview of Hazel and Helen’s new boat, the Valhalla, which is currently being fitted out ready for service next year – serious consideration is now being given to a 2017 Shetland trip.

Scapa flow is an amazing place to dive and the wrecks there are incredible. Being on the MV Valkyrie made it even better and the crew really helped to make the week enjoyable and as easy on everyone as possible. I will definitely be going back.