Off to the Thistlegorm


Wasn’t as sunny this morning when we got up, very hazy across the horizon and even after the dive it was still a bit overcast. 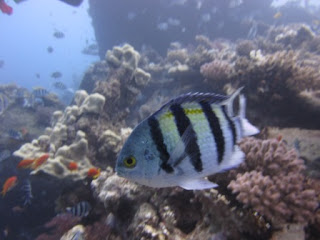 First dive this morning was the Ulysses, Chris went down first to lay in his SMB reel and blob which he tied to the wreck before we all piled in. It was a bit lumpy today and when we went over the side the boat came down and cracked me on the head which was a little painful but did help me go down a bit faster.

There were so many Sergeant Majors swimming around that we had to swim through them and they mobbed us throughout the dive. We headed down to the stern as Chrissie had said this was the best place to see Flambalina Nudibranchs but we didn’t find any and had a look around the prop before being ambushed by a group of divers from the Carlton Queen on a follow-ma-leader dive. Once they had moved off we had a bit of a swim through and came back round to the deck and swam between the decks back towards the bow. We had a look around and then went out to the funnel still searching for Nudibranchs and finally found a black and white striped one with a yellow rim (Pyjama Slug). 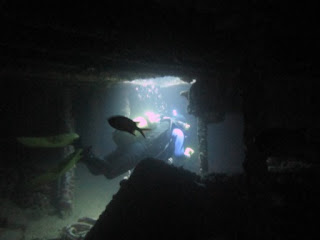 We swam over the mast and onto the reef after this just looking at the life and then, just as I had drained my battery and put my camera away, a Napoleon Wrasse turned up and swam leisurely by.

When we surfaced it was still a bit lumpy and the trip back was interesting. After breakfast it’s off to the Thistle but because we’re going broadside to the channel it will be a bumpy crossing so quite a few people are heading to bed.

We arrived at the Thistle to find 6 other boats already moored but only one is a live aboard so the day boats will be clearing off soon. We did our first dive and Chris had set our line right on the bow so we went straight down and had a good look round. The first dive was for a quick recce and then we have 2 more dives today and an early one tomorrow before moving on. I was really surprised by the amount of things to be seen on here. It is a big wreck, the biggest we do on this trip and well worth the extra dives. Joe and I decided to do the holds at the bow, swim through to the debris field then drift back over the deck to the bow for the return trip. With so many day boats we knew it would mean a congested wreck but there were still a vast abundance of people on it and most of them being lead around like school children. We dropped into the hold and immediately found a jeep with a massive moray living between the wheels who was less than impressed with our intrusion and then we carried on through to hold 3 past trucks, bikes, rifles and boots. From 3 we headed out onto the remains of hold 2 and the ammunition pile and got a picture of some of the shells still in their boxes before heading up over the deck plating and swimming through some of the accommodation. We popped into the bathroom and then headed back out to the rail which we then followed all the way to the bow, past the coal and water wagons. Then it up and out for lunch. 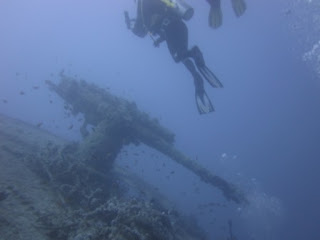 Second dive on the Thistle. The plan was to head down and then swim straight to the stern. So that’s what we did, although there was just enough current to make it a little tiring after swimming the length of the wreck. We had a good look round the stern and the prop before coming up over the side and photographing the guns. Then we dropped into the debris field and took some photos of the shells and Joe found a covered part of the hold with large shells still in the boxes. Can’t wait for the night dive now!

Night was brilliant, although limited to 20 metres it made no difference at all. The wreck was absolutely crawling with life, although the turtle was absent. Saw some tiny coral crabs living inside a spotted coral and loads of cleaner shrimps. There were even a school of tuna hanging around over the side and all the clams were out in full force.
Posted by Brett Parker at 23:53