Today was the first diving day of our Red Sea Trip. After spending the night in port at Sharm we trundled out to The Alternatives to do our check dive.


Just a quick word about the boat – Hurricane – it’s brilliant! Really comfortable, all the staff are really helpful and everything is done to make your life and diving as enjoyable as possible.

After sorting out our weight we had a bit of a bimble around some rocks before heading off to skirt a couple of pinnacles and then into a gully to get a bit of depth before returning to the boat and getting everyone to deploy their DSMBs to try them out. Biggest shocker was first that the water was toasty and the visibility was 15+ metres.

After coming back we shipped out to cross the sea towards the Abu Na Has reef for our next 3 dives of the day. 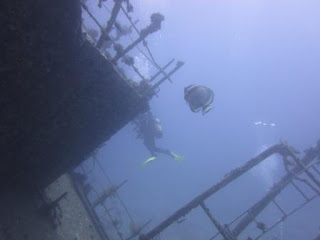 Second dive was Carnatic which was really good and had some great swim throughs as we went down to the bow and then headed to the stern and swam between the decks all the way through to the stern and then went out the big square windows at the end. When we cam e back to the centre to look at the engine and boilers there were quite a few divers being lead around so we headed out along one of the masts and found a nesting Trigger fish which wasn’t too impressed with us being nearby so we left it alone and headed into the bow to swim through the decks again and found a really big Scorpion fish that was really black and Joe got a good photo. We also saw quite a few of the broken port bottles. 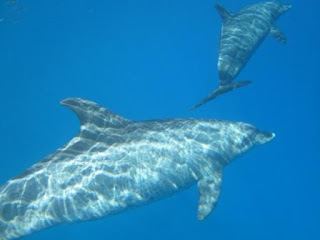 After lunch, which was fantastic, we got to do the most photographed wreck in the Red Sea (apparently) the Giannas D. I couldn’t believe that after rolling off the Rhib the wreck was right there as it starts at about 6 metres. We dropped down the sea bed and got some great photos of the wreck with some massive Bat fish around. We had a bit of a potter around then Chrissie lead us into the wreck through a companionway and down into the engine room. The engine room was obviously immense and there was so much to see. There were all the work shops and tools still in place like the lathe and milling machines and ladders and walkways all over the place. We went through this and then up through the skylight and out of the wreck. We went over to the bow and saw some great sea life, Parrotfish, Blue Spotted Stingrays, Batfish, Glassfish; it just doesn’t stop. Then we headed back up and got out. On the way back though we saw some dolphins and a few of us got in to snorkel with them. As soon as we got in they dived so we hung a round for a bit but then they came back up right amongst us and I got some nice close up photos of them. A real experience. 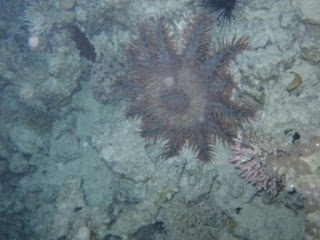 Our final dive of the day was a night dive but we didn’t really leave it late enough so it was still very light and it took about 30 minutes before it got dark enough to see anything different. We managed to see a couple of really big Slipper crabs, Lion Fish and a Crown of Thorns starfish. It was quite good but from tomorrow we’ll do the dives later so it will be darker and hopefully see some more different life.
All in all a fantastic first day and I can’t wait for the rest of the week.
Posted by Brett Parker at 00:45