Another sunny day - Brighton 13th May

Due to Eastbourne being blown out 2 weeks ago, our first dive of the year with Dagenham Sub Aqua Club (DAGSAC) saw us venture down to Brighton Marina, for 2 dives from the boat Brighton Diver II. Leaving London at a not-too-painful 7am, 4 of us joined 7 DAGSAC members for ropes away just before 10am. Paul was the skipper, and the boat was great: it had space, tea and a lift – 3 things that make any right-minded diver happy.


Although we had originally planned to dive the Pentrych wreck first (that was the site some of us visited on a recent trip from Shoreham, and had excellent visibility), we instead travelled further out to dive a wreck (or wrecks?) whose identity is/are uncertain, but which is/are known by many divers as the City of London. When we arrived, the boat Buccaneer was already there – skippered by Chris with Dave, that’s the boat we went out with from Shoreham the other week.

Descending using a line, there were no problems finding the wreck(s), which cover a fairly large area and which is/are very broken up. We reached depths of around 24 metres, seeing edible crab, starfish, anemone, soft coral and lots of bib, as well as beautiful shimmering pollock towards the end of the dive. We had been forewarned about the visibility, but 3 metres still let us see plenty. Unfortunately, due to a lack of a properly fitting suit, Elaine had to sit out this dive. Ken, Alan and I formed a buddy trio, and DAGSAC members buddied up to match experienced and less experienced divers (including one diver doing her first dip in British sea water). We ascended a little messily with a DSMB, clocked 34 minutes in the water, and got back on board using the boat’s lift. 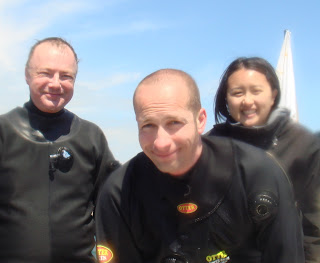 The second dive – which Alan didn’t do, and in fact slept through it in the cabin – was a drift along an apparently un-named ridge just south of Brighton. The ridge was more or less a continuous 9.5 metre depth, although we could go off into deeper areas along the way (but didn’t, as we feared the kraken). Visibility wasn’t great – 1 metre, possibly 1.5 in places, but we still came across a plaice and other fish. The most impressive thing we saw was the tail of a large conger eel, and – in another hole further long – it’s very wide body, however we couldn’t find a third hole with its head. During the dive Ken and I couldn’t understand why our DSMB was being pulled in the opposite direction to the current – later on, over lunch, we learnt that it had become entangled with a DAGSAC DSMB, which eventually had to be abandoned (but was later retrieved on the surface). Sorry, DAGSAC – we had no idea! After a 28 minute dive, exit from the water was less fun as the waves had begun to pick up, but there were no real problems, thanks to the boat’s lift.

Elaine – full of the energy that us weary divers lacked – unloaded all of our kit onto the jetty, and heroically carried a cylinder at least some of the way to and from The Brighton Dive Centre for filling. Whilst that was being done, the 4 of us went to eat outside, overlooking the marina, with the sun still shining. Some of now have pink foreheads (the only lobster we saw today). On the way home we visited Ken’s friends in Brighton, and got home around 8pm.

It was great to meet Gillian and the rest of the friendly bunch from DAGSAC, the dives were fun, the boat was great, the weather was AMAZING, and the lunch hit the spot. A grand day out.
Posted by Brett Parker at 07:05