We did it again! Despite Divefest being cancelled earlier in the year due to sponsorship issues the event still went ahead with a slightly reduced supplier base but the diving and entertainment were still top notch.

We managed 3 days of diving although Monday got cancelled as the weather looked like it was going to be bad so the hard boats went home.

Despite that we had a great trip and everyone thoroughly enjoyed themselves with a couple of people getting their first sea dives in. 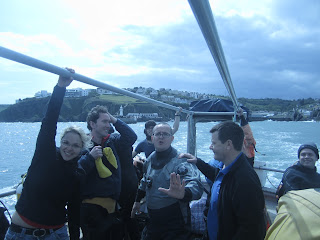 Bjorn's Report
The boat set off at 1pm, the tide was low so the boat was quite a way down off the quayside. This meant all kinds of wizardry was needed to get 24 cylinders and all the other gear down safely. There were some big swells in the sea so we needed to ensure our cylinders were well secured. We travelled to the first dive site, which was a reef. My buddy Clive was briefing me on what was going to happen during the dive. Safety procedures to follow if we got separated and what was going to happen at the end of the dive regarding the DSMB.
We got our equipment ready and performed our buddy check. When we reached the site, pairs of divers exited the rear of the boat. I took a large stride into the water and swam over the marker buoy. I got a rush of cold across my back and I realised that in the heat of the moment I forgot to zip up my suit! It was too late to do anything about that so I just had to suck it up. We gave each other the OK signal followed by the descend signal and we went down following the rope to the bottom.
We reached the bottom which was at a depth of about 20 metres. I had added 2kg to compensate for the extra buoyancy of the sea, but felt that I was quite heavy and took me a while to become neutral. There was a reasonable current and we were being drifted across the reef. The visibility was much better than I expected at about 8-10 metres. It was a very peaceful and relaxing dive considering my semi-dry suit was undone and I didn't really fall victim to the cold nearly as much as I anticipated. We saw spider crabs walking about, various corals and some beautiful fish. We even found a scallop which we kept for eating later. We regularly acknowledged each other with the OK signal and regular updates on my air supply. 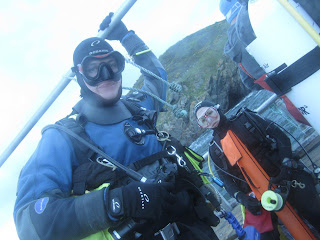 When my air reached 100 bar we stopped, Clive unrolled his DSMB, handed me the reel and began filling it with air. When it got enough lift He let go and it shot up to the surface. We ascended up the cable towards our 6m safety stop. As the air expanded we got lighter meaning we had to dump air out along the way, but i was unfamiliar with this BCD and the dump was very short. I couldn't find it quickly enough and at approx 8 metres I shot to the surface.
Clive came up to about 3-4 metres and told me to descend, which I did, back down to 6 metres. We stayed here as long as we could (10 minutes) to prevent any DCI. Then we reached the surface where we waved the signal to the boat, which came and retrieved us. When we both got back on board we debriefed and Clive decided against doing the second dive as a safety precaution.
All in all it was a very enjoyable dive which I thought went generally very well. Two things I have learnt from this dive is always remember to do up your suit! Secondly, be much more ready to respond quickly to buoyancy on the ascent.
Peter's Report
I enjoyed my first two dives at Dive Fest 2012 and how different they were. My first dive was like a fun dive, the second dive was more instructive. My first time out in a small boat, which was moving all over the place, was ok. When standing I found riding the movement of the boat with your knee’s helpeed, or being on my hands and knees. 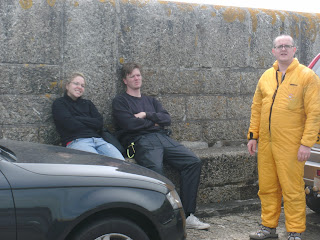 On my first dive I had taken a little too long to jump in as the boat was still moving and I guess moving further away from the buoy. Once in the water my buddy (Clive) and I OK'd each other and went down. About 10 meters down I did a buoyancy check and went diving. We saw lots of Hermit Crabs, Spider Crabs, Wrasse and a mix of Ballan Wrasse,  lovely blue florescent fishes.

My second dive, I was in a lot quicker and together with my buddy (Kim) went down. I was surprise to find so much seaweed, was not sure if I could touch it, which made me take a little longer to sort out my buoyancy. I stayed very close to my buddy whilst he explored the dark areas with his torch, diving through the seaweed checking under small cliff rocks and under debris.  We saw Wrasse and a mix of Ballan Wrasse and Corkwing Wrasse, Spider Crabs and Edible Crabs. Also various anemones around and within the boiler. By now I was down to 100 bars of air and it was time to head home.
Two great dives which will be add to my experience of diving. I would like to thank Clive and Kim for my day and to thank all that were there on the day.
Can't wait for next year!
Posted by Brett Parker at 07:02