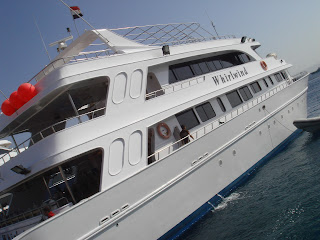 After a barely tolerable four and a half hours aboard an EasyJet flight to Hurghada we were met by a Scuba Travel representative who gave us our visas and sent us through passport control. A coach was waiting to take us to our boat, Whirlwind. Whirlwind was to be our home for the next seven nights. 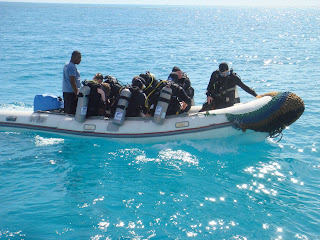 Upon arrival at the marina I had to endure the most terrifying ordeal: crossing the gangway onto the boat (I have fallen into the sea crossing one of those on a previous dive out of Shoreham). Safely aboard we were taken to the saloon for our introductory talk and paper filling organised by our guides for the week: Gomaa and Halmosh.

Our first dive was a check dive at a fairly sheltered location so we could all check our kit, weighting etc. It was a beautiful reef with lots of different hard and soft corals and hundreds of different fish species. Our guides were very patient with us and offered friendly advice to those that wanted it.

It was also an opportunity for us to get into the routine of kitting up, checking gas, and buddy checking on the boat before entering the water. It gave us a great overview for how things would work over the week. 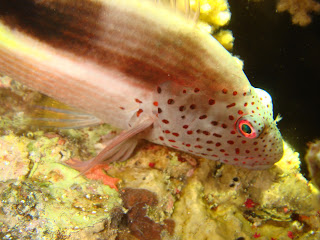 Six in the morning wake up calls, four dives a day, food and sunbathing in between. So followed several days of amazing diving. As a group we were offered guided or unguided dives – clearly they trusted us – on all but the night dives; these would be unguided. Each dive was preceded by a briefing by one of the guides on the screen in the saloon. Pictures of the site were annotated with main points as the guide walked us through the plan for the dive, indicating points of interest and an appropriate route to take to ensure we saw everything. 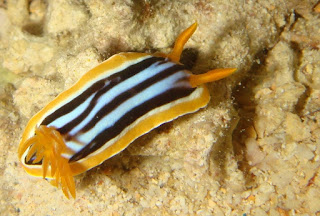 The start of the week was mostly reefs, ranging from expansive coral gardens across slow slopes at 15 metres to plunging walls that disappeared into the blue depths hundreds of metres below us. The range of animal and plant life was amazing and captivating. It's one thing to see it on a TV programme or in someone else's photographs but it's quite another to see it first-hand. Everywhere you looked there was something going on from squabbles over territory to long-distance pursuits for food.

A highlight for me was the moment we all turned to see our guide (Halmosh) giving us the signal of a shark and pointing. We all followed at pace to see it only to find ourselves straying slightly too far into a current going the wrong way. My buddy for the dive, Xin, grabbed my hand and let me do the finning for both of us until we were back in the right current. The current gradually increased until we were moving at quite a pace along the reef wall – great fun!

The latter part of the week was mostly wrecks which brought a different selection of life and different corals and plants. Most of the wrecks we dived included some swim-through sections which added another dimension to the diving – especially to someone who struggles with buoyancy control like me! I only bashed metal on metal twice all week though – a personal best!

I don't think it's possible to comment on a Red Sea dive trip involving wrecks without including a special mention of the SS Thistlegorm. Due to the socio-political climate of the time we were gifted three out of four dives on her without another boat in sight! Only for the fourth dive did we have company.

The ship itself is magnificent sitting mostly upright at the bottom of the sea like a colossus. Its holds are full of jeeps, motorcycles, rifles and other war-related supplies. The swim-through sections are great fun and add another dimension to the splendour – I can easily see why it is sited so frequently as being among the best wreck dives in the world. 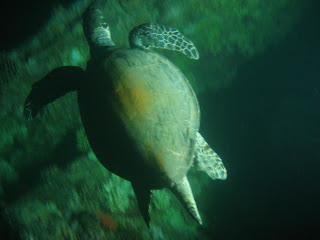 Our first dive on her was in what our guides called a “medium” current. The wreck mostly protects you from this current, especially if you dive it the way the guides tell you to! Only in a couple of places did we have to work hard to get across a gap to the next sheltered area.

The night dive we did was amazing – so many different forms of life than during the daytime and it gave the wreck an unearthly feel to it. A fantastic moment for me occurred when I came into view of the second hold to find my buddy Geraint (“G”) illuminating a swimming turtle with his floodlights like something out of The Abyss or Close Encounters. The removal of the current made the dive much easier and more relaxing and allowed us to take in more of the ship’s details.

Buddy diving is a core principle of BSAC diving and this trip was no exception. For all but two dives I was buddied up with Geraint and I was very fortunate in that regard. More confident than myself in the water I was more than happy to let him lead the way on the mostly unguided dives we as a pair opted for. Our shared love of diving and mutual respect made for a very easy and relaxed week's diving and his flood lighting meant I didn't miss anything on a night dive either! As I'm always the slowest to kit up I often found him sitting half kitted up just waiting for me to get a certain way through before continuing – much to the amusement of the rest of the group! 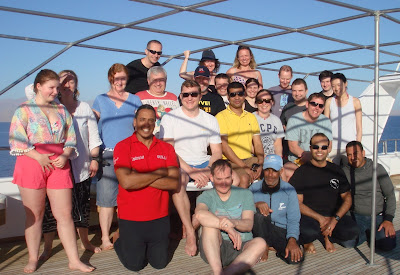 Of the 20 or so guests on board we were the largest group (a dozen or so). Among the rest were a family from Essex and a few teachers from oop North. Everyone was very friendly and relaxed and we soon started exchanging stories and making fun of how long it took me to kit up for every dive. Buddies were occasionally swapped around to make life easier on some of the singles in the group and to minimise the number of people diving as a three.

We were very well looked after. From cleaning our rooms, cooking and serving our food and helping us kit up to serving us drinks and putting movies on in the saloon for us to watch the crew did a fantastic job. It made for a much more relaxed atmosphere that I'm sure was enjoyed by all throughout the week.

So it was that we departed Whirlwind with fond farewells and promises to return to the Red Sea in the future. We spent our off-gassing day lounging by the pool or on the beach at a resort in Hurghada listening to a very eclectic mix of music (“Jailhouse Rock” followed by “I'm Too Sexy...”???) before being transferred back to the hotel for our 28 hour flight back to London, the cold and the rain. 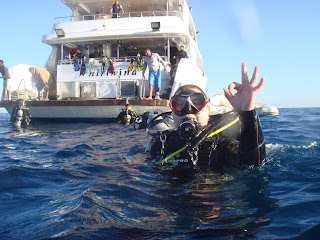 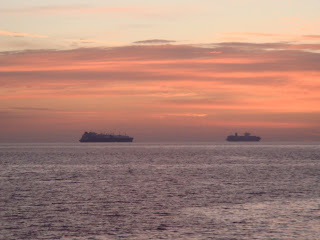