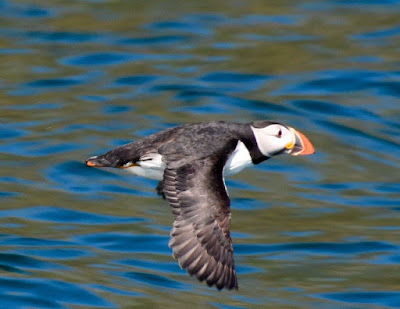 For the late May bank holiday several club members made their way down to Milton Haven in Pembrokeshire for 3 days of Welsh diving.

Diving with ‘Dive in 2 Pembrokeshire’ on the Overdale we were joined by Clare, Ian and George who helped us fill the boat.

On Saturday morning we loaded the boat and made our way past the gas loading stations in the bay and out towards Skomer Island. The first dive was Stack Rocks followed by Junkas Rock. Many had exciting dives full of life with nudibranchs, fish of various types, lobster and crabs spotted. Myself and Colin somehow took a wrong turn and experienced a lot of barren sand on the first dive. 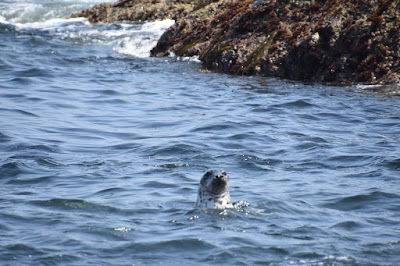 The weather was perfect on the Sunday with low winds, an almost flat sea and lots of sun. This made it possible to attempt the 20 mile journey out to the Smalls lighthouse and reef which is rarely dived. Close to a three hour journey was worth every second.

As we arrived at the Smalls, huge numbers of seals poked their heads out to inquisitively look at us almost as excitedly as we were looking at them. After kitting up as quickly as possible we were dropped in and went looking for them in the water. Most divers had at least some experience of seals underwater. I thought I was kicking Ross whilst swimming along a gully and turned to find seal tugging on my fin! Apart from the seals there were also some humongous lobsters hiding in the crevices.

Due to the water turning slightly rougher on the other side of the island a second dive was made on the same side in the afternoon, with more seals. Currents were a bit random and divers were picked up by one of the two boats which involved swapping passengers over for the return journey to Milford Haven. 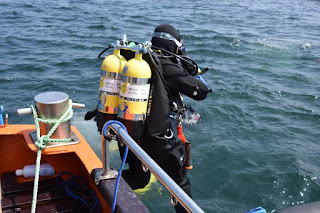 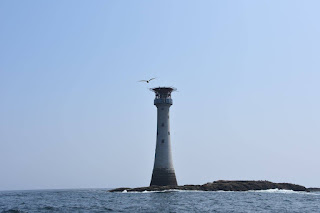 It was decided on day 3 to stick closer to harbour to enable everyone to start the long journeys home a bit earlier. To get better visibility we went just outside the bay to North Wall which was a wall dive with a lot of life. At least 4 species of nudibranchs were spotted and some were lucky enough to spy an Octopus.

The second dive was back in the bay at the Dakotian which was described by divers afterwards as ‘a massive lump of metal’ and ‘a proper wreck’. The Dakotian is a 6,426 ton British steamer, 400ft long and with a beam of 52ft. She was bound from Swansea for St John, New Brunswick, Canada, with a general cargo, including 1,300 tons of tinplate and, oddly enough, Christmas puddings and bicycles. The visibility was good and lots of swim-throughs were possible.

Overall a brilliant weekend of diving and a highly recommended dive boat and area.