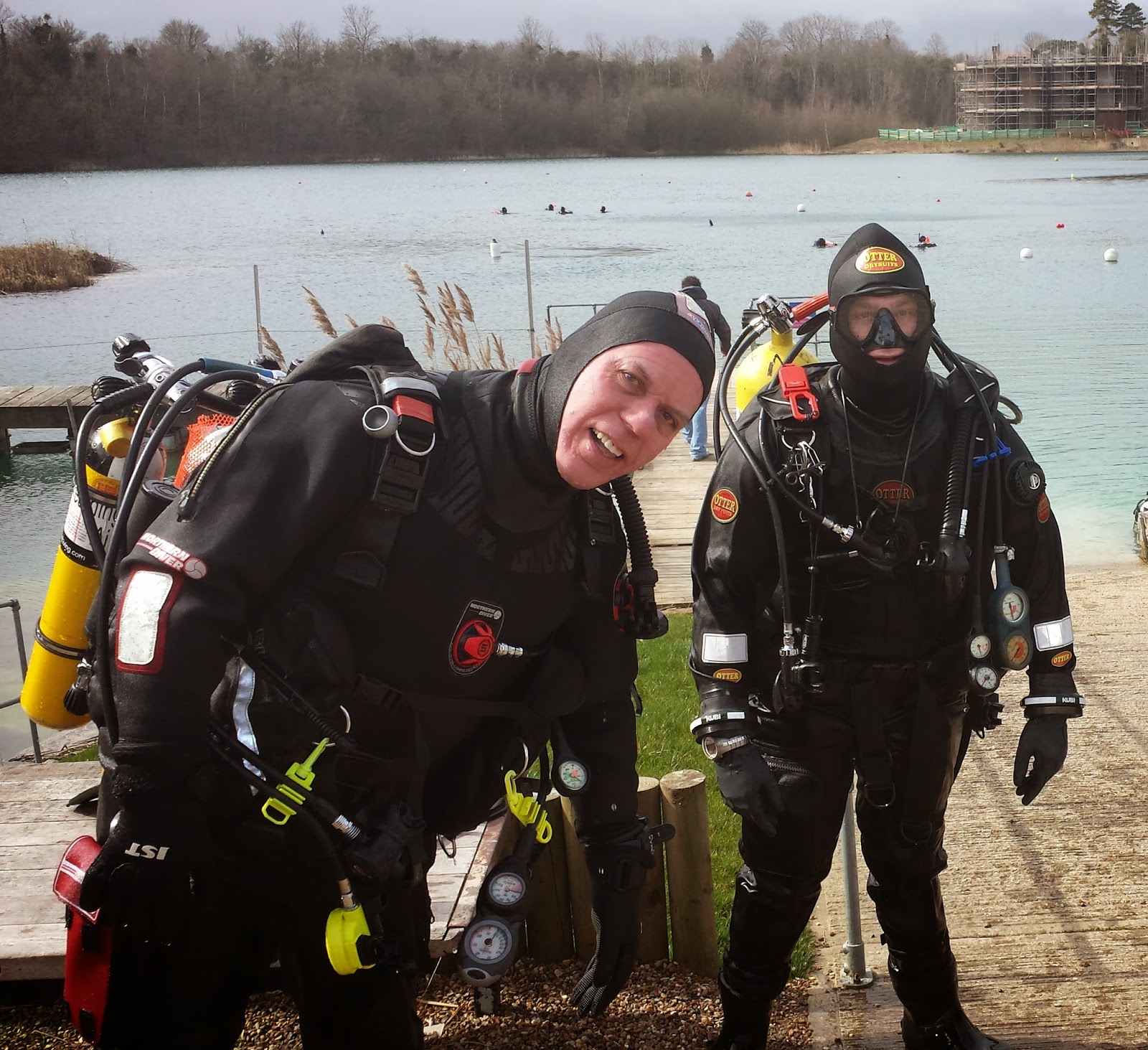 Arriving just after opening time (which is 9am on Saturdays), 5 divers from the club went to Holborough Lakes for shake-down dives and training. Steve R went in with Lee, survived the cold and completed open water lesson 001. Jane, Joe and Chris went in as a trio to 10.2 metres, found all their kit (including a new twin set and dry gloves) worked alright, and managed a 45 minute dive. Visibility wasn't too bad. Staff were friendly and helpful. The group were packed up and on their way home before 1pm.
Posted by Victor at 10:48 No comments: 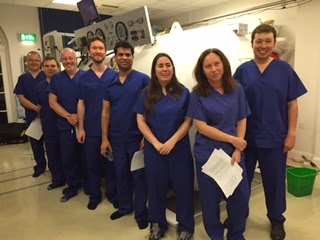 The first dive of the season for some club members involved a visit to the London Diving Chamber at the Hospital of St John and St Elizabeth near Lord's cricket ground. Dressed in fetching scrubs, 8 divers plus a member of staff did an evening chamber dive to a "depth" of 40 metres. Bottom time was 12 minutes, and divers were in the chamber for 45 minutes in total. 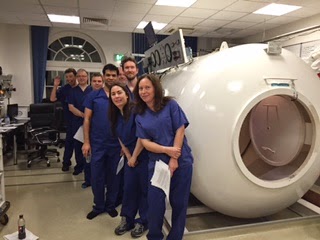 A clear briefing was given before the dive, with the relevant physics explained as the dive progressed. Nitrogen narcosis was felt, and the effects of this on divers was illustrated by a test (involving circling letter "L"s on a piece of paper) before and during the dive. Sally somehow managed to score better when under the influence of nitrogen. Experiments with paper cups were also carried out (they fell to the floor slower in the denser air). The temperature in the chamber rose significantly as the pressure increased. And everyone had squeaky voices, an effect we don't notice on actual dives as we can't talk underwater.

There is already talk of a return visit. A minimum of 6 people would be needed. The cost is £30 per diver.
Posted by Victor at 10:36 No comments: 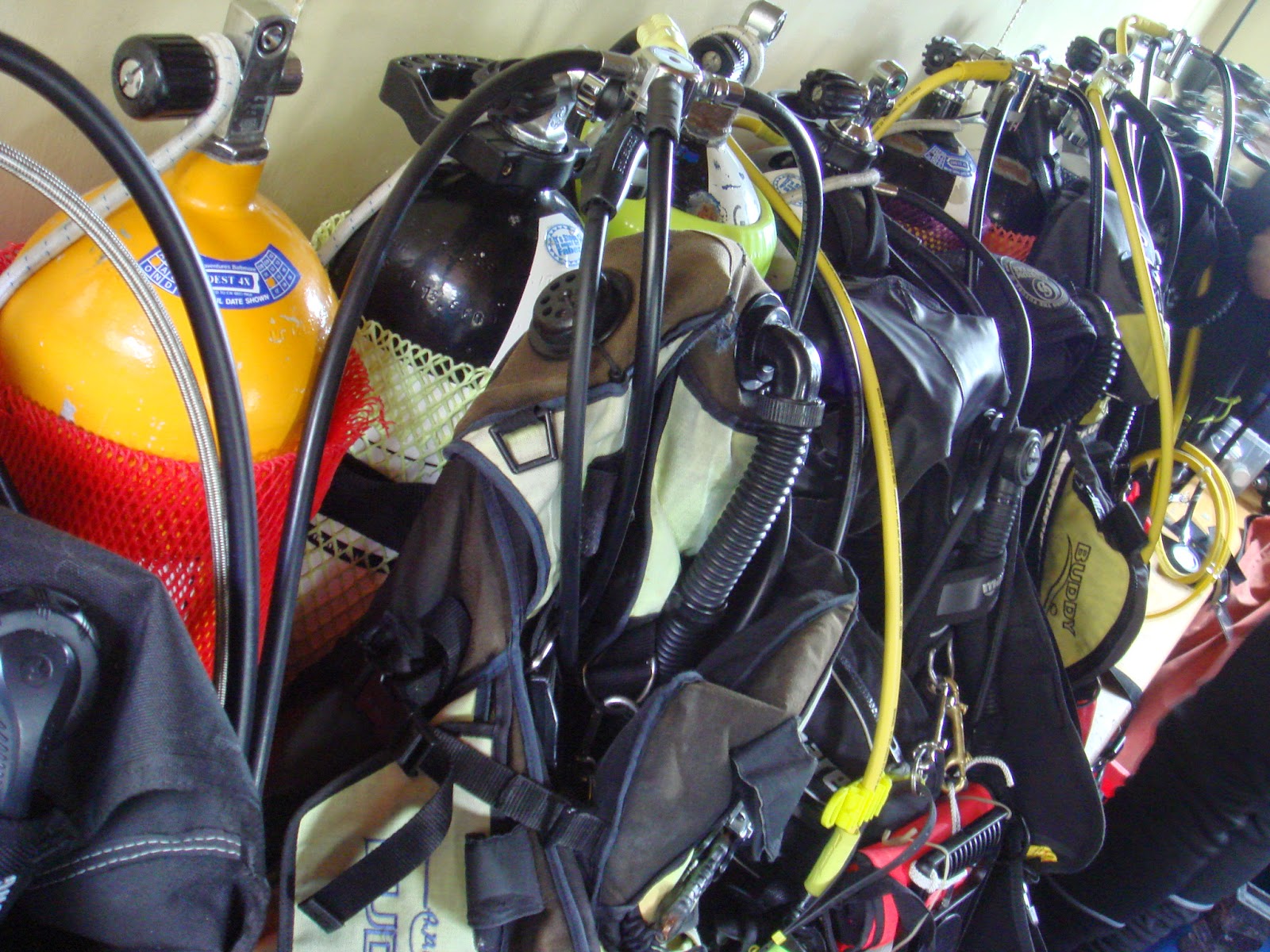 It's March already! Time to dig out the dive kit and check it's all there, tested and usable. Now's a good time to put kit in for servicing at Amphibian before the start-of-season rush. Check computers and torches for batteries, check cylinders are in test, check regs and BCDs are recently serviced, and check o-rings, inflators, seals, valves, zips etc are all functioning properly. And don't forget to give yourself a check - the pool is available every Wednesday evening for pre-season skills practice and kit testing, and the club's first lake trip will be on 21st March.
Posted by Victor at 10:45 No comments: