Chair’s opening
- Pat welcomed everyone and noted the meeting was quorate.
-  Highlights of the year were noted.
- Daniel was awarded the Barry Maisey award for his hard work before he joined the committee last year.
Minutes of the last AGM were approved. No matters arising.

Diving Officers’ report
- Clive noted club members had done approximately 655 dives on club trips in 2016 (not including dives done by non-members on those trips, and dives done by members on non-club trips), which added up to approximately 2.5 weeks underwater. 63 dive sites were visited on club dives.
- Clive noted that the 2016 dive list included more dives than 2015, and the 2017 dive list will further increase the number of dives planned, in response to members’ feedback.
- Lee noted 2016 was a good year in terms of safety. No decompression sickness incidents, and no significant incidents needed reporting to BSAC. A few minor incidents occurred, however these were all resolved safely.
- Lee referred to the National Diving Officer’s Incident Report. 10 deaths involving older divers were reported, medical factors were implicated as the cause of 8 of the deaths. Immersion Pulmonary Oedema (fluid in the lungs) was highlighted as a significant contributory factor in the incidents – Lee outlined what makes people susceptible to IPO.
-  In response to questions from members, Lee and Ken reported that the BSAC Incident Report made no mention of physical fitness or using rebreathers as contributory factors in the deaths. Lee noted, however, that there is a correlation between poor fitness and high blood pressure, which is a known causal factor in incidents.
- The 2015 Dulwich incident was discussed. Lee noted that the coroner’s report found that the death was preventable.
- Clive noted that members, when abroad on non-club trips, often found they were the only divers carrying out buddy checks – it remains necessary to do these checks, even when others around you are not.
-  The 2017 dive list is online, and members are encouraged to sign up for dives.

Treasurer’s report
- Ken noted that there was more income than expenditure in 2016, even when not taking into account the Sport England grant.
- There has been a net increase in membership – 11 members left the club, and 17 joined.
- Ken to ask Ed to audit the accounts.

Training Officer’s report
- Sally noted this has been a good year for training, with 10 Ocean Divers qualified, and 6 currently being trained. There are currently 10 Sports Diver students. 3 members gained their Dive Leader qualifications (1 more is close to qualifying), and 3 are undertaking Advanced Diver training. 1 member became an Assistant Diving Instructor (another is about to do the Instructor Foundation Course), 1 became an Assistant Open Water Instructor, and 1 became an Open Water Instructor. 1 member became an Accelerated Decompression Procedures instructor. 3 members did the ADP and Buoyancy and Trim courses.
- In recent months there has been slowdown in training and try-dives (since we moved to St George’s Leisure Centre, and due to some members completing their OD courses), but training has still happened every week. Extra pool sessions for SD students have been organised (e.g., DSMB practice).
- We had aimed to run 60 try-dives in our 60th year, in connection with the Sport England grant. Just under 40 were done, an increase on the 22 done in 2015. Sport England have not raised concerns about this number.
- Sally was of the view that free try-dives should continue in 2017.

Equipment Officer’s report
- Ross noted that the final items to complete the 10 new sets of kit (funded by Sport England) have now been received.
- Purge button covers on the new regulators are being replaced.
- The ongoing servicing costs of the new kit were noted.
- Some old club kit items will be disposed of.
- Maggie C has some tall 12-litre cylinders to dispose of. Dave still has lead weight for which he would like donations.
- New members are still encouraged to invest in their own kit.

Secretary’s report
- Victor reported that his workload had been reduced by Sally taking responsibility for answering emails re: joining, training and try-dives, and by Lee monitoring the club ‘phone.
- Weekly emails have been sent to members. It will be up to the new Secretary and committee as to whether weekly emails will remain the main means to disseminate information to members.
- In terms of promoting the club, its activities and interests, the club set up a new website, wrote to the council regarding the Canada Water Leisure Centre redevelopment, ran a stall at the Dulwich Festival Fair, invited the Mayor of Southwark for a try-dive, and featured in a full-page article in Southwark News and a small feature in Scuba magazine.

Any other business
- The committee has been looking into insurance of the club’s new kit.
- Seven Islands Leisure Centre is due to reopen in April. Docklands Dive School have a contract with St George’s Leisure Centre up to the end of March.
-  The role of the proposed co-opted Ocean Diver / Sports Diver representative on committee was discussed.
- The risk of melanoma to divers (who spend a lot of time on boats) was discussed. This risk should be highlighted to members. The risk of cataracts was also mentioned.
- Pat and Victor are standing down from the committee, and were thanked for their work.
- Sally was thanked for her work on securing Sport England funding, and the huge benefits of this project to the club were noted.
- Pat thanked the St Peter and the Guardian Angels Social Club for hosting the AGM at short notice. 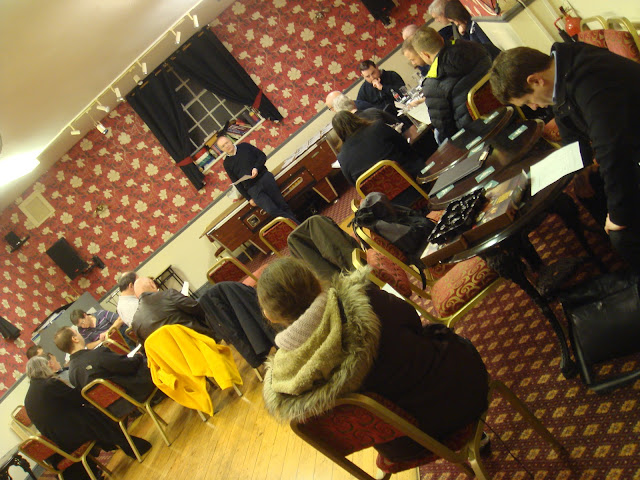 - BSAC no longer process DBS clearances for Assistant Instructors. Teresa has contacted BSAC about this.

- Agenda has been circulated. Similar running order to last year’s AGM.
- Lee to discuss 2016 and 2017 dives, Dulwich branch incident (and its implications for us), BSAC’s information re: causes of incidents and correlations with age, health etc, plans for risk assessments on club dives, and the importance and meaning of the reworded self-declaration medical forms.
- There will be no Thursday evening pool session on 09/02/2017.
- Daniel to provide an up-to-date membership list/numbers (to ascertain quoracy) and remind members that annual BSAC membership fees have increased.
- Agreed to include Sport England grant and free try-dives project on the AGM agenda. This has been a great success, it has helped attract many new members, and Sally’s work on this should be noted.
- Agreed to pay for a round of drinks (for everyone except current committee members) after AGM from club funds.
- No proposals for constitutional motions have been submitted.
- Nominations are open for committee positions until 8pm on 01/02/2017. Non-constitutional motions can be submitted up to that same date and time.

- No update on when Seven Islands will reopen (other than “Spring”).
- Use of St George’s continues. If Seven Islands does not reopen within the next few months, Thursday evening pool sessions might be discontinued, and we may concentrate on Tuesday evenings, although this wouldn’t be ideal for moving kit.
- Ken needs to pay Docklands Dive School £1k for Tuesday and Thursday evening sessions to the end of March.
- No update on plans for redevelopment of Seven Islands. Southwark council / British Land are still reconsidering their preferred location for the new leisure centre.

- Ken reported that the club is in a good position financially.
- Some members are yet to pay for 2016 dives. Ken is chasing.
- Membership numbers may have dropped a little at the end of 2016, as people moved away or came to the end of their OD training. Numbers are probably below 50 again.

- Lee to add monthly lake dives to dive list.
- 2nd Shetland trip to be deleted from dive list.
- Sardinia in October looks viable. The BSAC centre there will be open.
- A trip in February (somewhere warm) is being looked into
- Possible additional Plymouth, Falmouth, Mylor or Newquay trip discussed. Clive to investigate boat/skipper availability [post-meeting note: a 4-day trip from The Lizard has been booked].

- The club still has £510 unspent, although some of this has been earmarked for kit not yet provided by Amphibian.
- The club must account for all spending of the SE grant, and then make a proposal for (or return) any leftovers. Committee discussed the purchase of an analyser, or running a Sunday afternoon try-dive session for kids.

- Daniel has received emails re: web hosting renewal. Ken to deal with this.
- The need to encourage newly-qualified divers to go diving was discussed again. Agreed to run refresher sessions at the pool.
- Pat to look into insurance for club kit.
- Ross to obtain more key fobs for kit store.
- Ross to draw up a risk assessment (for pool sessions) with reference to BSAC’s template.
- Pat suggested having an Ocean Diver / Sports Diver representative as a committee position. This person can be elected by OD / SD members (be they qualified or in training) at the AGM. Nominations would need to be collected in advance. Victor to circulate an email about this.