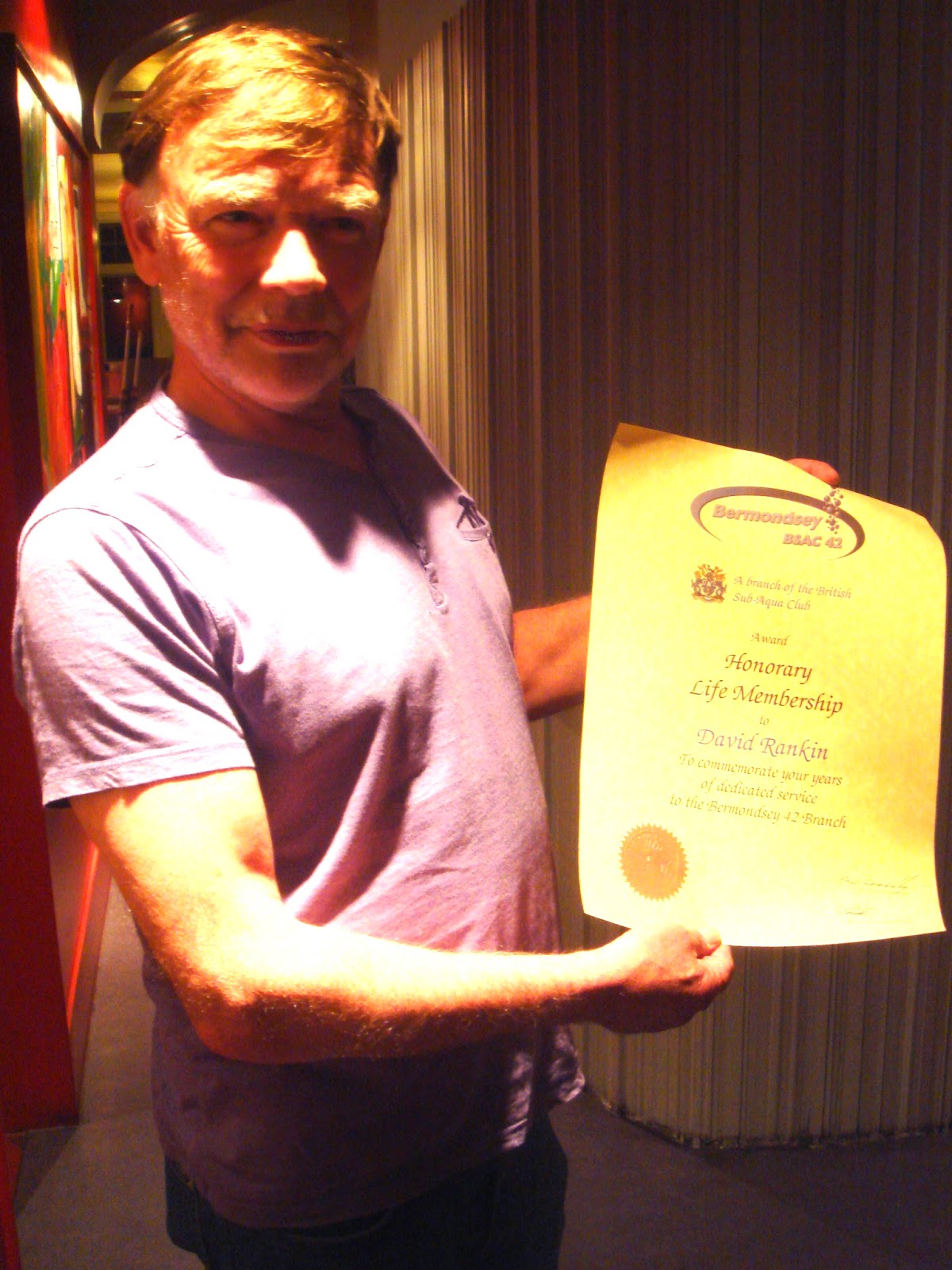 After an admirable 41 years (to the month) with Bermondsey BSAC 42, and following his recent retirement from diving, the club awarded Dave Rankin honorary life membership at a special Wednesday night gathering at the Yellow House, Surrey Quays. Dave, the club's longest-serving member, was presented with the scroll by our Chair, Pat.

In those 41 years Dave has done a huge amount for the club, occupying almost every committee position (not all at the same time!), beginning with Equipment Officer in 1973, including Diving Officer in 1980-85, and most recently Chair until 2013. Always willing to give good advice to newer divers, Dave's been a regular, a real help, and a stalwart. 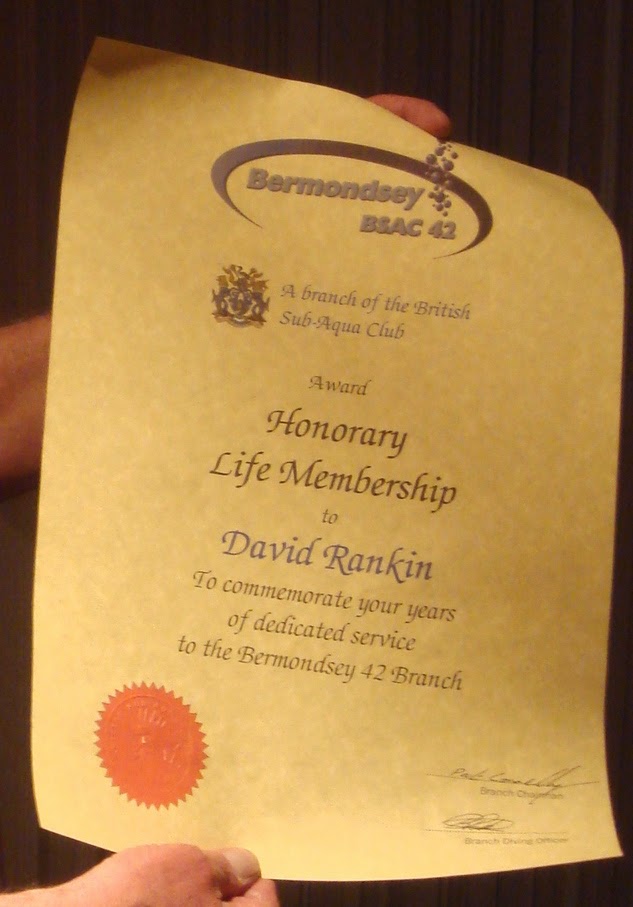 The award of honorary life membership warrants a little reminiscing over Dave's dive career. When Dave joined in the early 1970s, the club met regularly at Grange Road baths (where he did the A-test in December 1972) and members would go for pints afterwards at the Dockhead Stores pub on Tanner Street. Not counting a sneaky, unlogged dive at Chesil Beach a few weeks earlier, Dave's first loggable dive with the club was from the club inflatable, off Chesil Beach onto the wreck of the SS Gertrude and another wreck, in a home-made wetsuit on 25th May 1973. Dave's favourite dives are still "any I come back from", but over the years he's enjoyed diving HMS Hood, the SS James Eagan Layne, the SS Maine, Eddystone Lighthouse, Hands Deep, Hilsea Point and various wrecks out of Weymouth. His last major dive trip overseas was to Chuuk/Truk in the central Pacific. Although he stopped logging some years ago, Dave's done around 2,000 dives in those 4 decades, equivalent to several weeks underwater.

Congratulations, Dave, and thanks for everything you've done for the club. 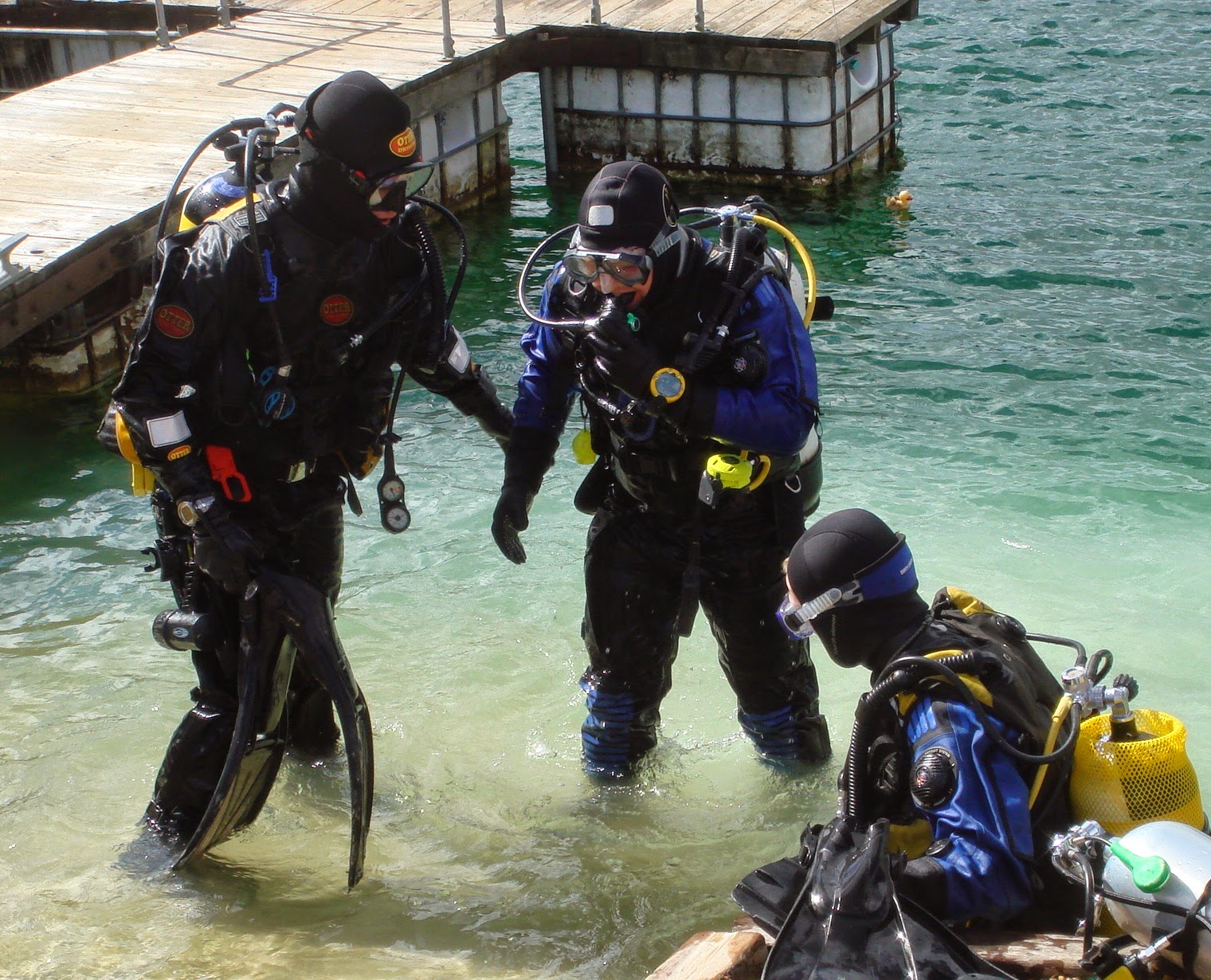 This trip highlighted the importance of shakedown dives and kit testing. Many minor kit issues were successfully resolved that day, and - before anyone even got in the water - we discovered a burst zip lube bottle, realised a set of regs had been left at home, and experienced drysuit zip failure. All these were much easier to deal with (and were much less disappointing) in the car park of Holborough Lakes than they would have been on the Brighton boat the following day, had that trip gone ahead.

Kim's busted zip meant he couldn't dive that day, leaving his students without an instructor. So stepped forward Chris, gallantly helping out in the hour of need. Such is the BSAC way, it seems - clubs co-operate, instructors assist as and when they are needed and can do so, and there's an understanding that getting more and more divers through their training is beneficial to all of us. Pats on the back to Chris for helping out.
Posted by Victor at 14:31 No comments:

If I had to sum up the lake dive in one word, that word would be "insane". Reaching the lake early in the morning I was optimistic as the weather wasn't so bad, the water looked pretty calm and I had a bowl of oats for breakfast. What could possibly go wrong? Fast forward a few hours, I'm geared up and about to enter the water. I looked like a giant condom inside a wetsuit with much added weight to help me sink. This meant my maneuverability was reduced to that of a pregnant woman making me feel like a penguin.

All penguin'd up I enter the water. Slipping on my fins, not so bad. So far so good. I'm then told to do a backwards roll entry. I plunge into the freezing water, I clench my teeth and suck it up. The only word running through my head was "Shit" and "Cold". Ten minutes in, I warm up very little, the wetsuit wan't very snug but I complete the exercises. Leaving the lake was a relief, I warm up as quickly as possible with a not so shabby cup of tea. I turn to the lake, people in Speedos are about to jump. People are crazy.
Overall, 10/10. Would dive again. I may be crazy.