In a brilliant turn-out on a cold evening in mid-December, thirty-odd club members (plus partners) took over an entire restaurant - the very good Jaflong on Lordship Lane, East Dulwich - for a night of civilised dining and sober reflection upon the year's diving experiences. With comedy Clive compering (and organising), prizes were awarded, some with deadly seriousness, others with none, as follows:

Best trainee of 2012 - Jill.
Most improved diver of 2012 - Bjørn.
Biggest (above the call of duty) contribution to the club in 2012 - Steve (for the Canada Water dock dives, and help with training).
Best buddy pair of 2012 - Alan and Colin (for their eventful dive in Newhaven).
Biggest boo-boo in 2012 - the incurable romantic Navneet.
Best club trip organiser of 2012 - Victor (for the Brussels trip).
Tallest story of 2012 - Brett (for his "massive crayfish" story).
2012 silly kit prize - jointly awarded to Colin, Elaine and Chris.

An impressive array of dive and stationery-related prizes were then dished out in the raffle (Chris won everything), and long after 11pm a merry bunch of revellers ventured on to The Draft House for a few more lemonades before bedtime.

Normal Wednesday meetings at the pool will resume on 9th January 2013.
Posted by Brett Parker at 06:11 No comments:

Somehow one expects a lie-in on a Saturday at this time of year, so what were we doing crawling out of bed in the middle of the night on this particular Saturday? Answer: going to Brussels to dive a 35m deep indoor pool on the outskirts of the city. 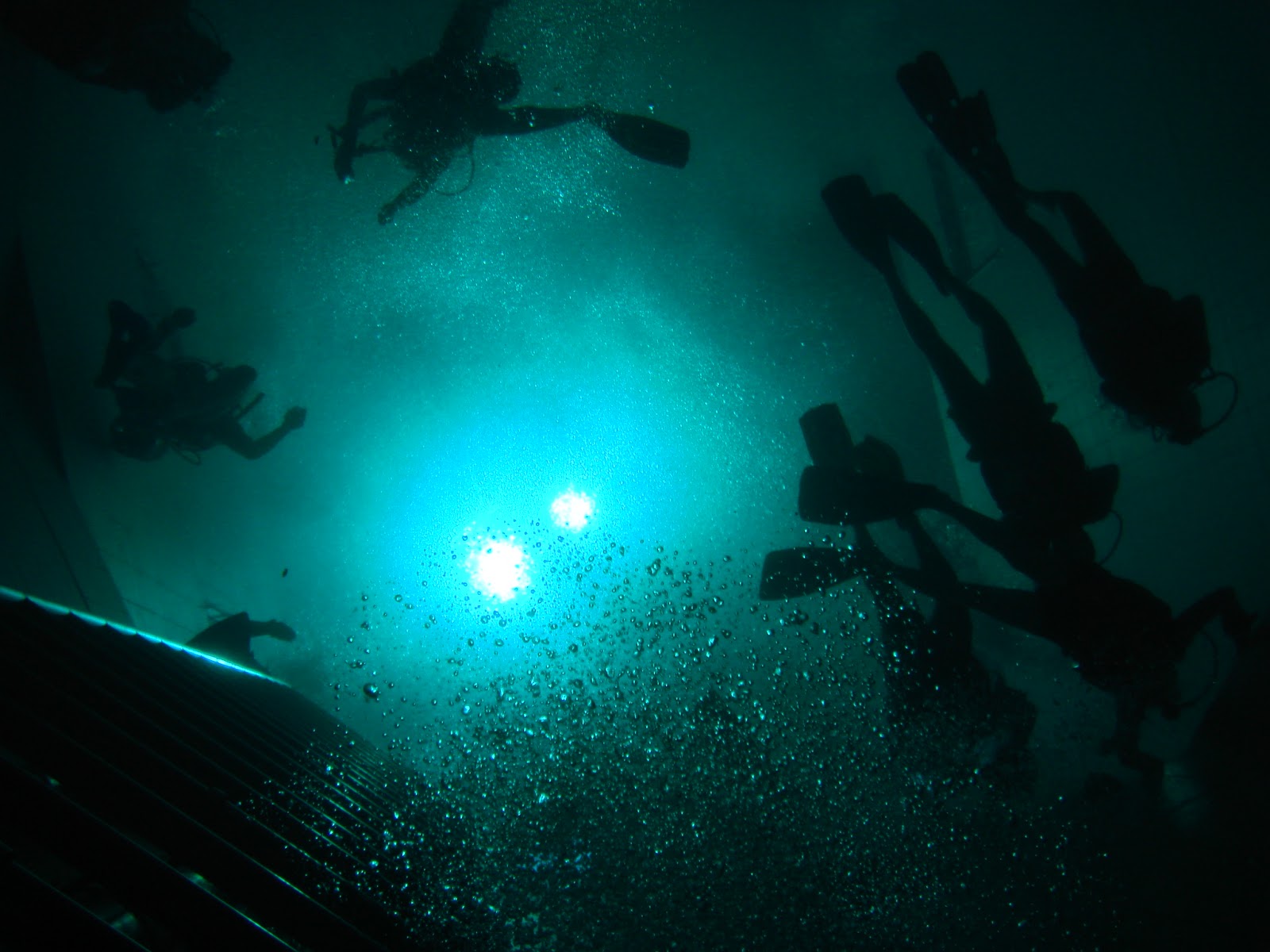 Sixteen of us (thirteen from Bermondsey, and three from DAGSAC) met at seven o’clock in the morning on an overcast November Saturday at St. Pancras International for a weekend in Brussels, under the excellent organisational skills of Victor. After an uneventful train journey to Brussels and bus and metro ride across Brussels to the hotel (Brussels has an excellent system whereby you buy one ticket which covers your entire journey including changes provided you take no longer than forty minutes). We dumped our bags, and set off to explore and find lunch (pizza and pasta for the group I was with), before meeting up at the hotel to check in and set off for Nemo 33.


The White Hotel is worth a comment, as it had pretensions to display the development of art and design in Belgium since 1945. I don’t know if all rooms had copies of a small coffee table book describing such development, but there was one in my room, along with a cast of a sculpture of a bull’s head. There was certainly a significant effort at style, whether or not successful (I’ll let my fellow divers decide). Other things included a bike in the foyer, and the lifts which were idiosyncratically typical of this type of hotel where the users of the lift have to open the doors, but they also had small representations of human figures variously painted on the doors and wall. Nevertheless, it was a comfortable hotel with a good variety of food for breakfast and served until 11.00, which other hotels could learn from, not that we were able to take full advantage of it, as we had to be at Nemo by then. 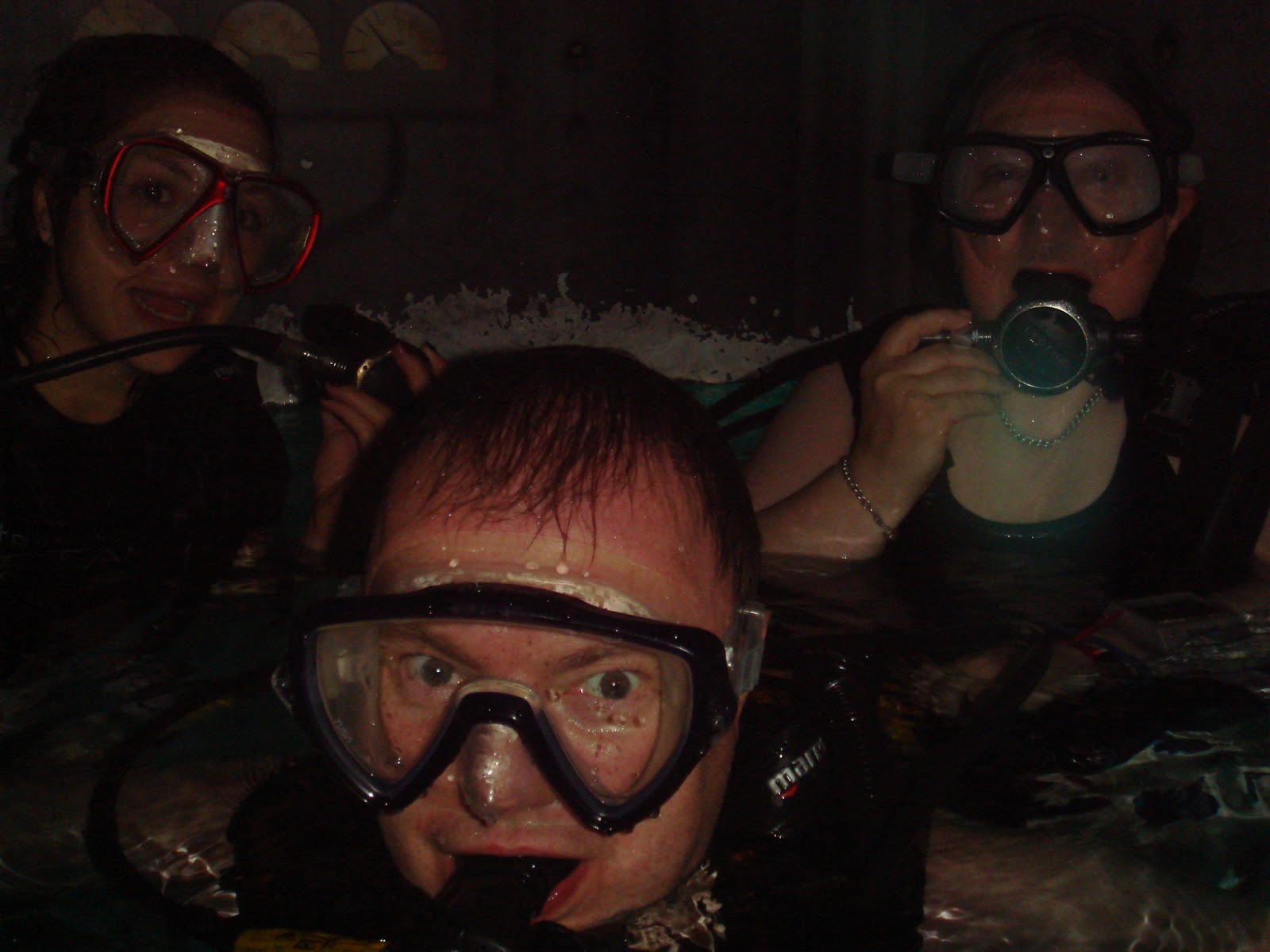 Back to Nemo 33. This dive centre cum restaurant resides in the outskirts of Brussels, the most significant thing about it being the pit which (according to my computer) was 35.1m deep at the bottom. The whole pool is about 20m square with a temperature near that of warm bath water. There are varying depths, immediately on entry it must be about 1.5m, where everyone mills around putting on fins (as you are not allowed to jump in you have to walk down the steps, although on our second dive, a number of people from the other group diving, insisted on stopping on the steps to put their fins on – understandable if less than 5’4”, but not if 6ft!). Much of the pool is split between 10m and 15m depth, where we were allowed to practice freediving for the first ten minutes of the session. Then back out to put on scuba kit and back in again to explore the rest of the pool. In one corner was the 35m octagonal pit, reached either by swimming across directly to it or through a swim through, which had a couple of underwater caves at either side which could be surfaced. I was diving with Mariette and on the first dive, when it was just our group plus three others, there was nothing to worry about as we all descended steadily to the bottom, variously amused ourselves for the 10 minutes that we were allowed down there, doing fin pivots etc. A nice slow ascent, another mill in the 10 and 15m areas, until the session finished. This was followed by a very pleasant Thai meal in the bar area, quite mild which I prefer. Return to hotel and off to a local bar for a few drinks before turning in. 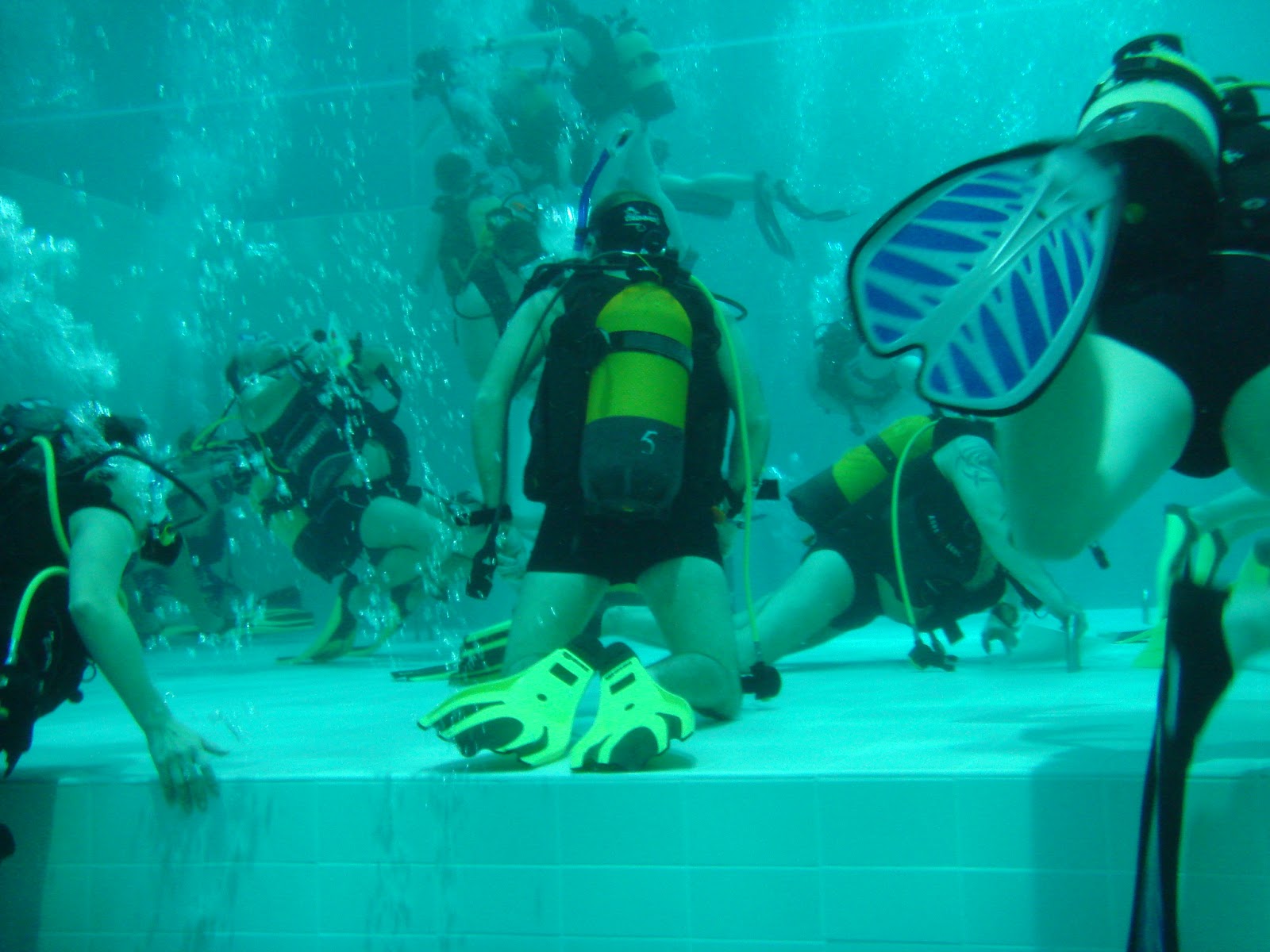 The next day’s dive was a little more exciting as we shared our session with another group of about 30 people with very varying skills. Most of them plunged straight down the pit, and after Mariette and I had suffered being bumped into several times, we gave up and pottered around for 10 minutes or so in the shallow bit with Victor and Ken, who seemed to have come to a similar conclusion. However, as 10 minutes is the maximum time permitted to be below 20m, we just had to bide our time before everyone else came up and we could descend ourselves. The most interesting thing with all those people expelling all that air in a confined space was that it so reduced the water pressure in the pit that it created a significant current pulling us towards the pit.

This was followed by a stroll round Brussels, people variously visiting art galleries, museums, finding a nice lunch somewhere, before we all met up again at the Gare du Midi for a smooth journey back to St Pancras, disregarding the tedium of having to go through UK Border Control twice!
Posted by Brett Parker at 06:08 1 comment: