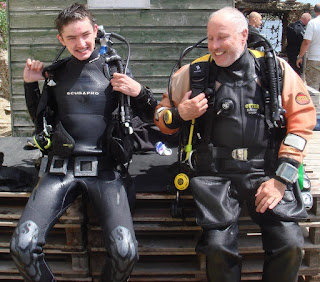 Buckland again for the club’s 4th lake dive of the year. Thought had been given to doing shore dives at Seaford instead, however it was decided that a less tidal site was needed for today’s training. Ben went in with Clive to do his first open water dives, while Vinay completed his with Lee, bringing him tantalisingly close to becoming Ocean Diver qualified.

Buckland was quieter than it was the last time we visited, so we had a decent amount of space for kitting up, briefing, debriefing, sunbathing, dragonfly spotting, solstice celebrating and eating cake. 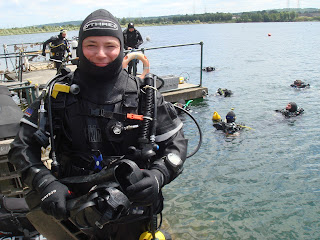 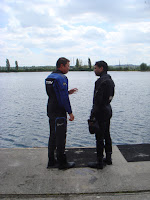 Ross, Victor and guest star Frank dived as a trio, doing a 64-minute sightseeing tour to depths of up to 12 metres. It was good to be able to do a relaxing dive, seeing the various aeroplanes, boats, pumphouse well, plastic shark and gnome garden in relatively good visibility (5 metres in places) and decent temperatures (17 degrees at 6 metres, 13 degrees at 12 metres). The sun shone for some of the morning. 5 of us went in for a second dive, and we were all done by 2pm. 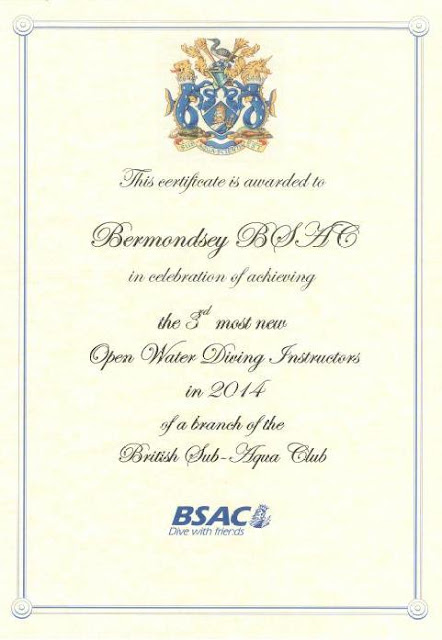 Bermondsey BSAC 42 has recently received recognition for achieving the 3rd most new Open Water Diving Instructors in 2014 of all of BSAC's branches. Well done Ken for qualifying as an instructor last year.
Posted by Victor at 11:18 No comments: 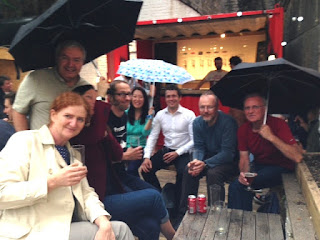 Much to our surprise, the Crust Conductor pizza bus – which had been parked outside the arches of the Brick Brewery in Peckham – had moved on to do the festivals by the time we got round to visiting for this club social organised by Teresa. No problem, though – after gathering for drinks in the yard of the brewery the 9 of us (including all 3 of the club’s Peckham contingent) went on to Anderson and Co on Bellenden Road and ate very well there. Good call, Teresa. The evening involved a little rain, some planning of dives, and much highlighting of the lack of a pizza bus. Most of us dispersed after 10pm, with a few carrying on to a nearby pub. Next club socials: whitewater rafting in the Lee Valley on 5th July and the club barbecue at Teresa’s on 18th July.

[trip report to come]
Posted by Victor at 00:46 No comments: 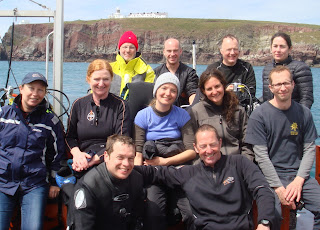 The club hadn’t been to Pembrokeshire for a while, so a trip was organised for the late May bank holiday weekend. 10 of us from Bermondsey went, with Barbora and Giulia from Imperial branch filling the remaining 2 places on the big orange dive boat Overdale. Brian (of Dive in2 Pembrokeshire) was our skipper, with Mike, Paul and Alex helping and doing some skippering over the weekend.

Following a relatively easy load-in on the outside of Milford Haven marina (free parking available close to ramp) and a leisurely kitting-up as we made our way out of the ria and out towards Skomer and Skokholm, diving began on Saturday with visits to High Point and the Pinnacles, where depths of up to 21 metres and dive times of up to 56 minutes were achieved. Not a bad start to the weekend – visibility was up to 4 metres, water temperatures were 10 to 13 degrees, and dogfish, nudibranchs and many spider crabs were seen on these scenic dives. Unfortunately a weight belt was lost at High Point, but Brian helped out with a loan of a harness.

On Sunday we dived The Lucy, an upright wreck whose deck sits at about 36 metres. Some of us went to the wreck first for a quick look and then headed south to Rye Rocks, others spent the entire dive either on the wreck or the shallower reef – these 2 dive sites offer something for everyone in a group with varied interests.  The second dive at White Lady was scenic.

Monday involved dive sites less far out, chosen so we could get back to harbour earlier and begin our journeys home. The Dakotian is an interesting freighter, sunk in 1940 near Dale. Some of the group entered the wreck, taking care not to disturb the silty bottom. Plenty of wildlife in good light and visibility meant decent photos of candy striped flatworms and other critters were taken. A current over the top of the wreck gave us some exercise, but wasn’t too challenging. Some of us sat out the second dive, but those who did it (The Greek) reported the best visibility of the weekend at around 8 metres. 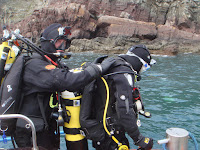 Brian and his crew were excellent – patient, knowledgeable, and enthusiastic about diving. Special mention needs to be made of Mike’s excellent boat manoeuvre which he executed when we arrived back at harbour on Saturday afternoon. Thanks to the crew we also got some views of seals and puffins during our surface intervals, and on Monday we moored at Dale and were able to stretch our legs for 20 minutes between dives. Fills were easy – we loaded cylinders onto Brian’s trailer at the end of each day, put in our requests, and they were ready for us the next morning. Overdale has a head and a lift, and a decent amount of space (including a cabin that could probably accommodate all of us) 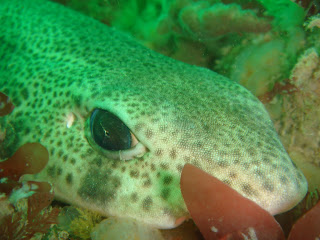 We stayed at various B&Bs including Scoveston Grove and the Ferry House Inn (both recommended). We ate well at Halen Mor on Saturday, and most of the group met up again at Martha’s Harbour (also good) on Sunday evening. Brian provided packed lunches (£5/person/day) for those that requested them.

Journey times were around 7 hours outward (for those of us who took the Friday off work and left London in the morning), and 6 hours back (leaving Milford Haven at 3pm-ish). The weather was generally brilliant – other than some drizzle on Saturday morning (a lot less than had been forecast), we enjoyed sunshine all weekend. 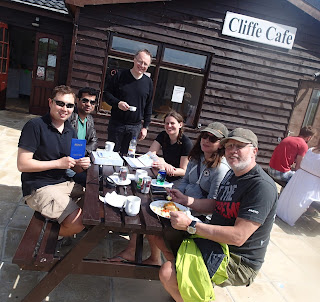 Gates opened early again today, and we joined the many other divers visiting Buckland that morning. The Bermondsey lot - doing our 3rd lake trip of the year - comprised Lee, Sara, Clive, Ken, Ed, Victor and Vinay, with Sally kindly doing shore cover, and despite our numbers we got demoted to the cramped benches nearest to the water when a diving school arrived. Sunshine and cake made up for this, though. 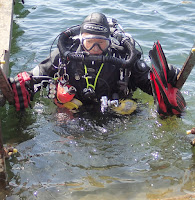 Sara and Vinay ticked off Ocean Diver sheltered water lessons (Sara completing hers), Victor finally got DO1 done (thanks, Ken), and Ed shook down. For some of us it was good to get in the water in preparation for the Pembrokeshire trip the following weekend.

Water was 14 degrees at the surface, 9 degrees in the coldest parts. Visibility varied. 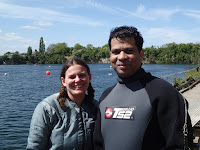 After 2 dives, an unlawful confiscation of ankle weights, and more cake, some of us visited Buckland's new cafe (and ceramics shop) for signing off qualification records and post-dive banter.