So I returned to Scapa!  It felt like I'd been away for ages but it was actually only a year, almost to the day. However, this trip surpassed last years pretty much from the start. 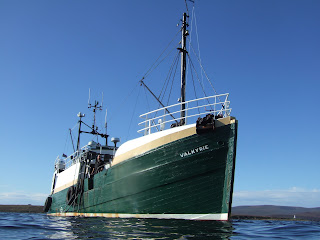 Firstly the boat was nice, not just to look at but everything was where it made sense to be!  There's a big dive deck, nice size lounge with flatscreen, dvd player and collection of dvds as well as the prerequisite dive magazines and some books.  From the lounge you drop down a ladder to the sleeping deck with 6 two-bunk rooms which weren't any smaller than a Red Sea liveaboard except the beds were above one another.

Back upstairs, the enclosed walkway from bow to stern has a wire to hang your dry suit on between dives as well as cubby holes for your flipflops and bits.  Then you carry on to the service area with the tumble-dryer and access to the other shower room, a hatchway to the engine-room (No Entry), door way to the wheelhouse and the kitchen/dining room at the stern.

We were met by Hazel (Skipper), Dug (the dog), Rob (boat boy) and the rest of the team who had come up earlier. 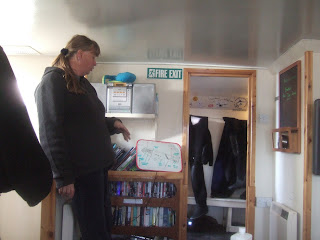 When we had our briefing Hazel told us that the weather might not be too great towards the middle of the week but we'd look and see what happened on the day, (remembering my last trip I was already planning trips to the Italian Chapel, Distilleries and Stone Circles) but the next couple of days would be fine.  She also explained that Saturday was a fend for yourself day so we should go and find something to eat elsewhere and suggested the Ferry Inn.  Its changed a bit since last year and to be honest, although it looked nice it was blooming expensive, beer and food all London prices which was a little disappointing.

The diving for the week was brilliant, all on twin 12's except for 4 on Inspiration rebreathers which meant we all had some bottom time on even the deeper wrecks.  I know some of the club still talk about doing 50m dives on a 3lt Pony and still doing 20 minutes of deco but I took all the gas I could. 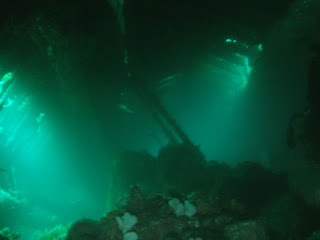 The one day we thought we'd lose actually was really good and although a bit lumpy coming back onto the boat was all good.  By the end of the week Rob was getting sick of asking me how the dive was as I loved every single one. 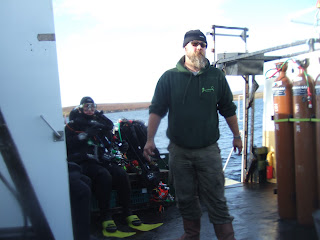 One of the reasons for this was that Hazel made her dive briefs so detailed and clear that I knew what i was seeing when I went down.  Despite being here and doing some of the same dives as last year I saw things that I just didn't realise this time.  I found the Armoured Control on ever boat that had one, we saw the guns, the swim throughs, did the penetration, got in, on and around all the wrecks in a way that I totally missed last year. I know that some of it was down to having longer bottom times but mainly it was down to know where to go, what to look for and what things would look like when I got there. 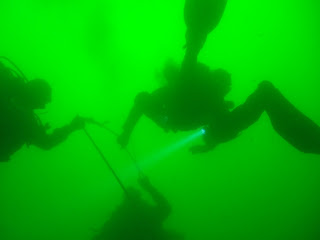 The other big plus about the trip was the food!  Helen runs the galley and going hungry is just not going to happen on this boat, Lunch is always enormous, Dinner simply massive!  Everything is freshly prepared and just superb.  There was one diver who didn't eat meat and his food looked as good as ours and sometimes better!  As one person mentioned it was like going on an eating holiday interspersed with a bit of diving!

All in all this has to be one of the best trips I've been on and I cannot wait to see what next year is like. I'm also going to keep my eye open for any slots that become available as I can't wait to come back.
Posted by Brett Parker at 06:55

Email ThisBlogThis!Share to TwitterShare to FacebookShare to Pinterest
Location: Europe