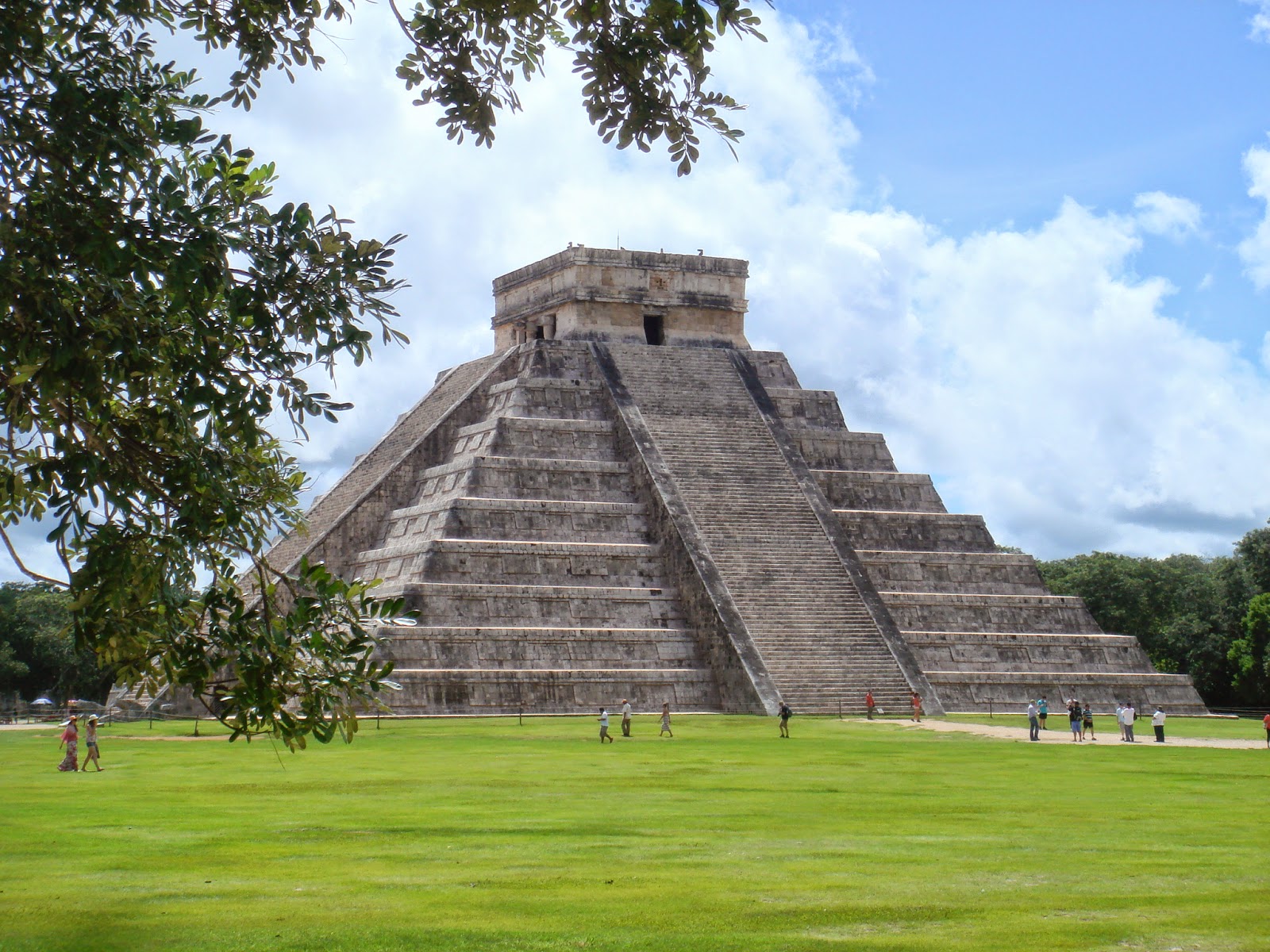 Jill and Ken organised an excellent 2-week trip for 8 of us, with roughly half our time spent on Cozumel (off Mexico’s Caribbean coast) and the other half based back on the mainland in Playa del Carmen. We flew with Virgin Atlantic, stayed at the Mallorca Hotel in Cancun on the first night, stayed at Occidental all-inclusive hotels for the rest of the trip, and made use of Canada Transfers. Dives were booked with Pro Dive Mexico (http://www.prodivemex.com/ ). Our visit coincided with Mexican Independence celebrations, and included a day trip to the Mayan sites of Chichen Itza and Coba. Highlights of the trip included: 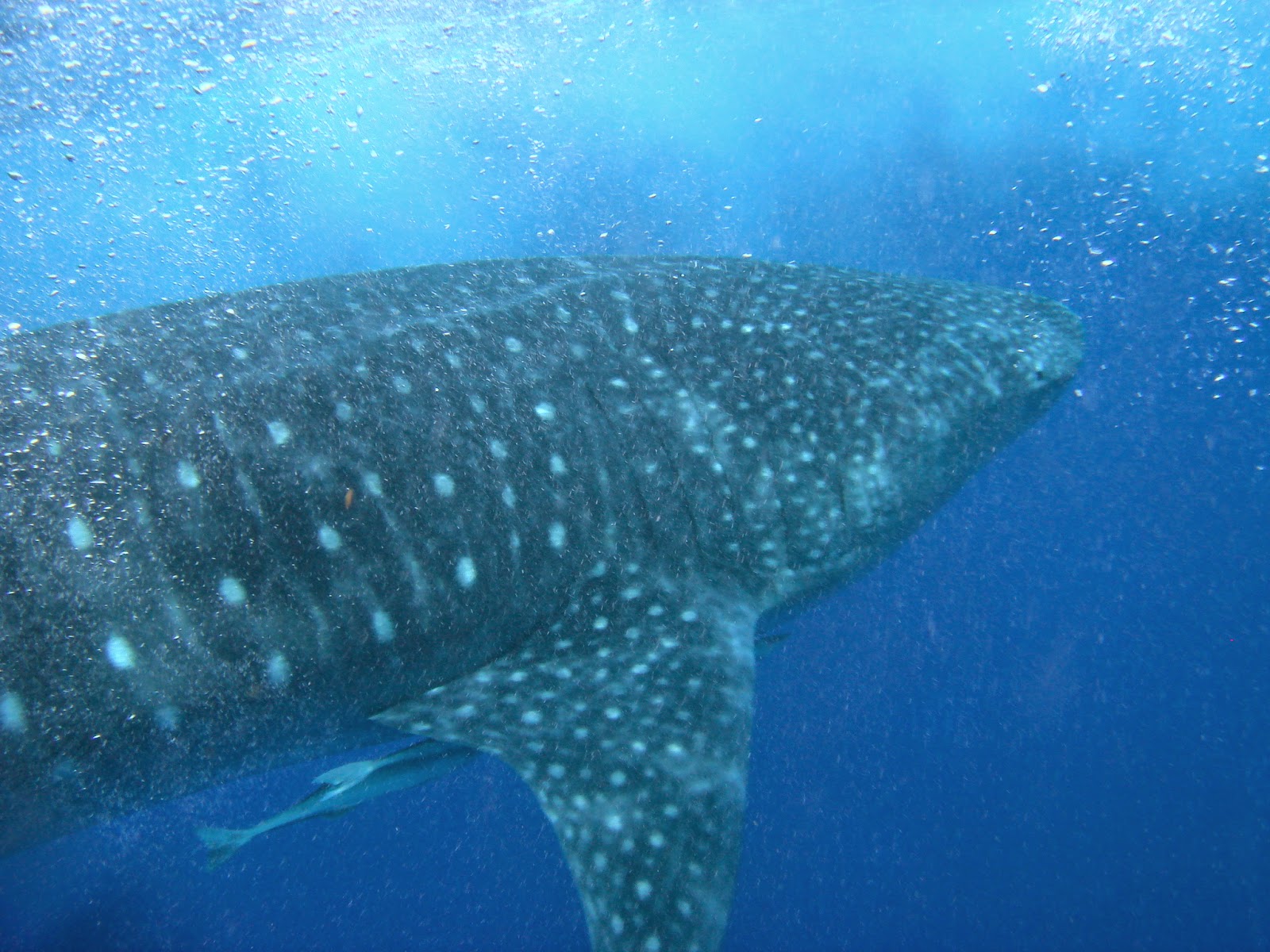 Not yet adjusted to the different time zone we found ourselves in, several of us woke early and found each other at Samboras café, a few blocks away from our hotel. Later that morning, Csaba and his colleagues from Eco Colors (http://www.ecotravelmexico.com/whale-shark-cancun-tour.php , booked through Pro Dive) picked us up for our whale shark snorkelling trip.

This was the tail end of the whale shark season. In September these massive creatures (the largest fish in the sea) move on to other waters. On this trip, although we didn’t have to wait long before seeing the sharks, their scarcity meant that several boats converged at the point where they had been spotted, resulting in a rather chaotic scene with dozens of snorkelers in the water at the same time, all attempting to get a glimpse. The 3 sharks we saw were moving fast, but most of us managed to get a good view of these impressive creatures. We each got into the water 2 or 3 times.

The boat and its crew were good. The trip included lunch, which we had while moored at Isla Mujeres on the way back. I didn’t see any feeding, coercion or harassment of the whale sharks, which is good, however the crew told us that the sharks don’t normally move that quickly through the water, and that this might have been a sign that they were starting to be bothered by the number of snorkelers present. Csaba later sent us a good video of the trip. 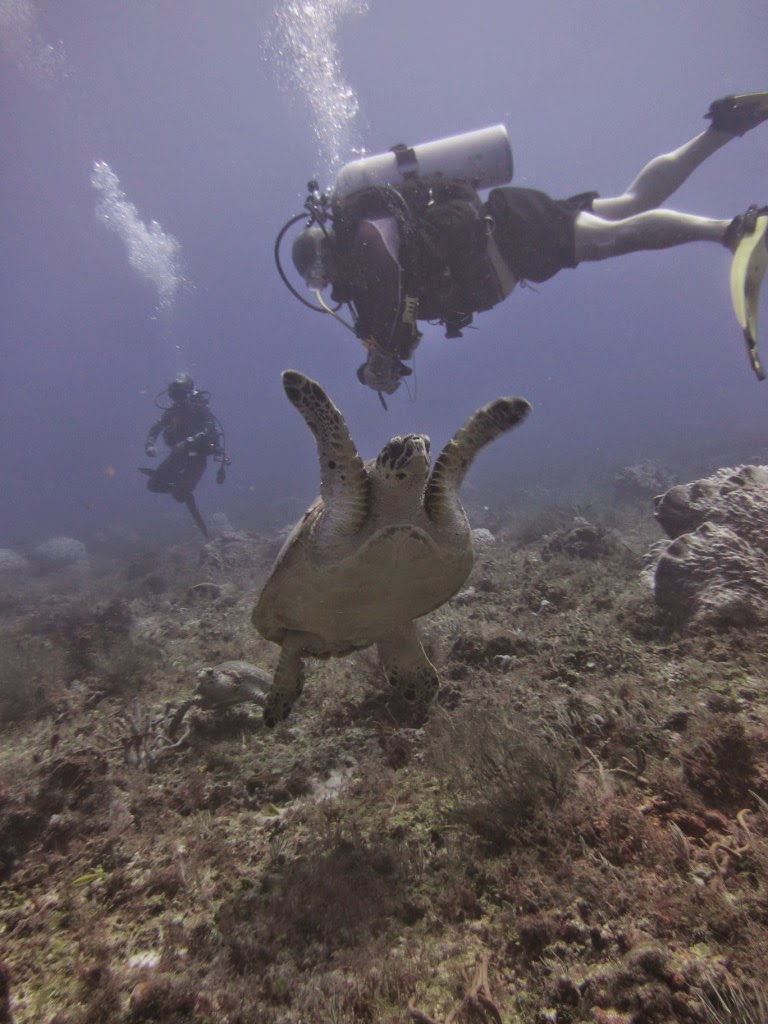 Our arrival at the resort – the Occidental Grand – was fairly painless. We paired up and signed our lives away in exchange for room keys and beach towel tokens. There was little signage around the place so finding our room was an exercise in trial-and-error in the 30-degree heat but we managed.

The room itself was very spacious and air conditioned which was great for drying clothing between activities.

We dived with Pro Dive who had a “shop” onsite; making the diving very low-stress. We basically turned up each morning and got on the boat. Our two guides, Martin and Benjamin, were very enthusiastic and clearly knew what they were doing.

There followed six days of two dives a day on various reefs. They threw in a couple of wall dives with some great swim-throughs and we asked to do the wreck that was nearby. The wreck could be seen from the surface – one of the boat crew pointed it out – which was a first for me. 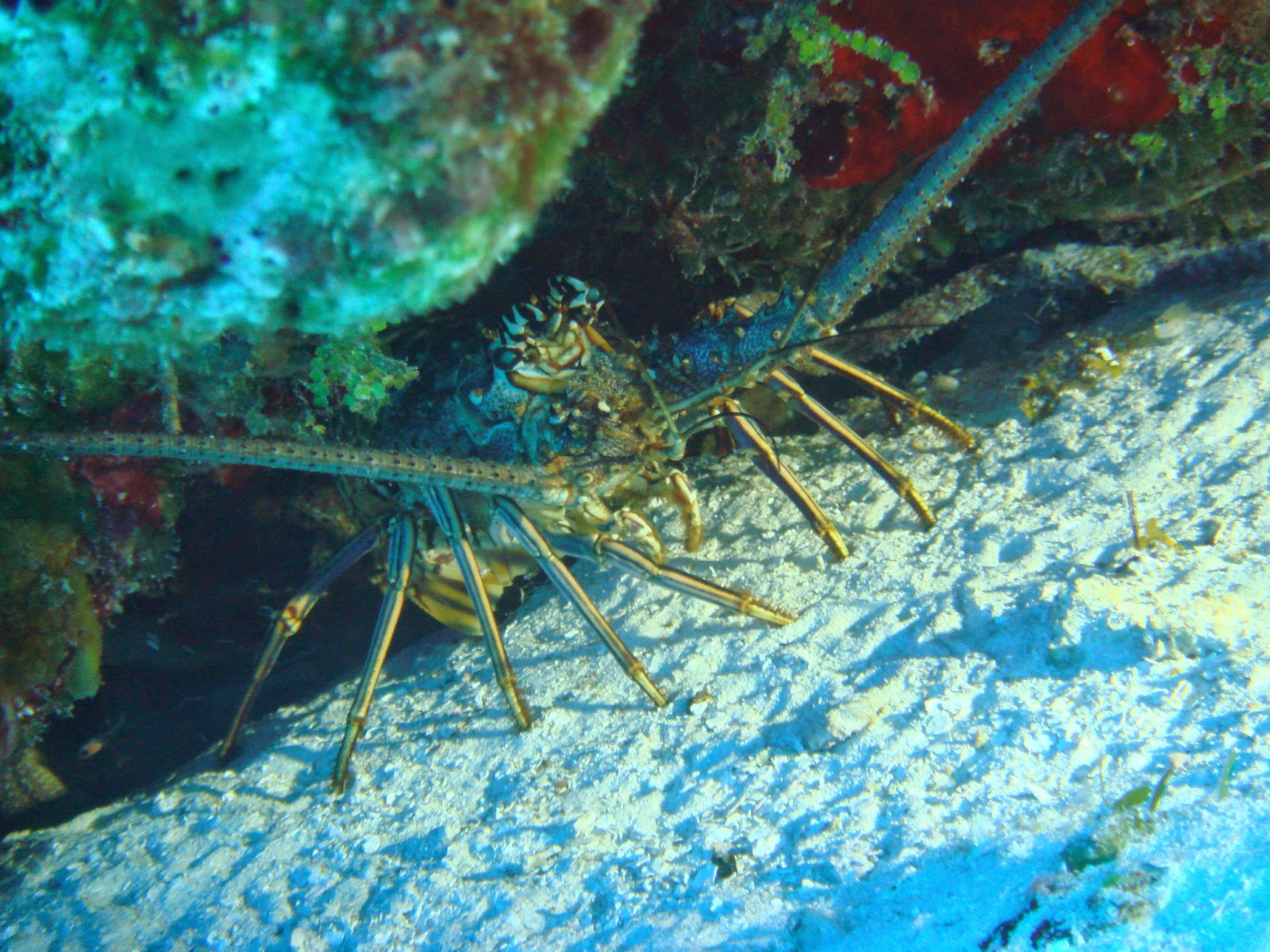 The reefs were breathtaking. Literally! I had to spend 15 minutes on two of the dives breathing off the guide's octopus due to my air consumption. Huge sponge and coral formations of all kinds sheltering a huge variety of fish and marine life. Barracuda, turtles and nurse sharks rank among the celebrities that featured on our visit. We also saw several small toadfish, a species endemic to Cozumel's reefs, so it was great to see some of those.

We did a night dive midweek to mix things up. A fun dive with plenty of different life. We saw several eels and a couple of octopi (among other things). 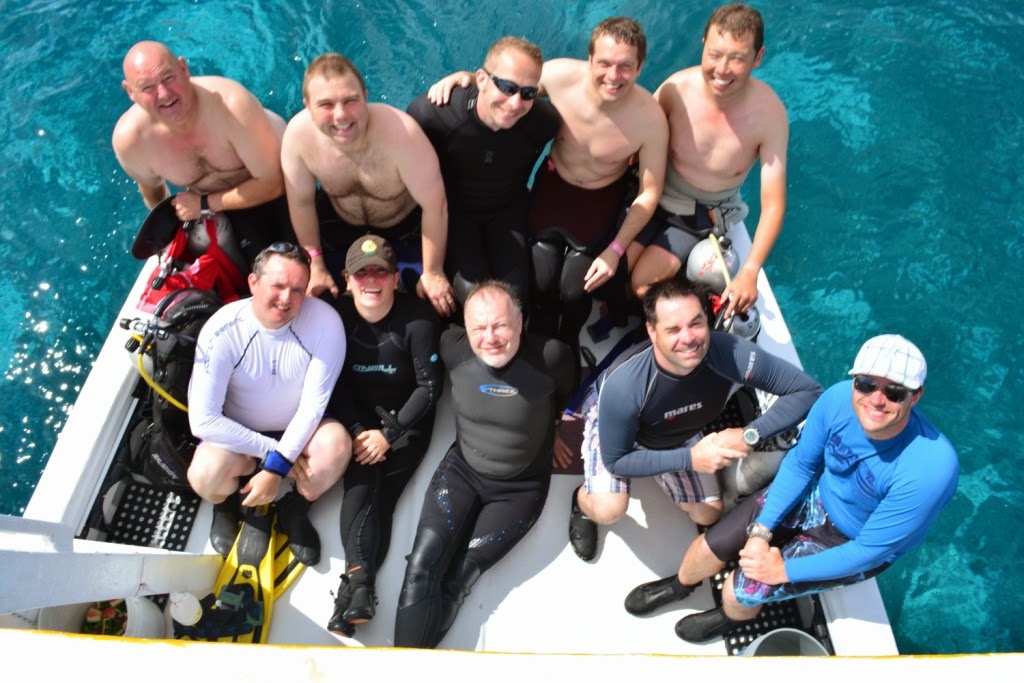 On dry land we got to enjoy buffet breakfasts, lunch and dinners. We sat for lunch and breakfast overlooking the sea where we watched several storm systems move across the horizon over the course of the week. We made good use of the two pools, the gym and the various bars located around the resort. We had a couple of meals at the a-la-carte restaurants for good measure and went into town for a lovely meal. 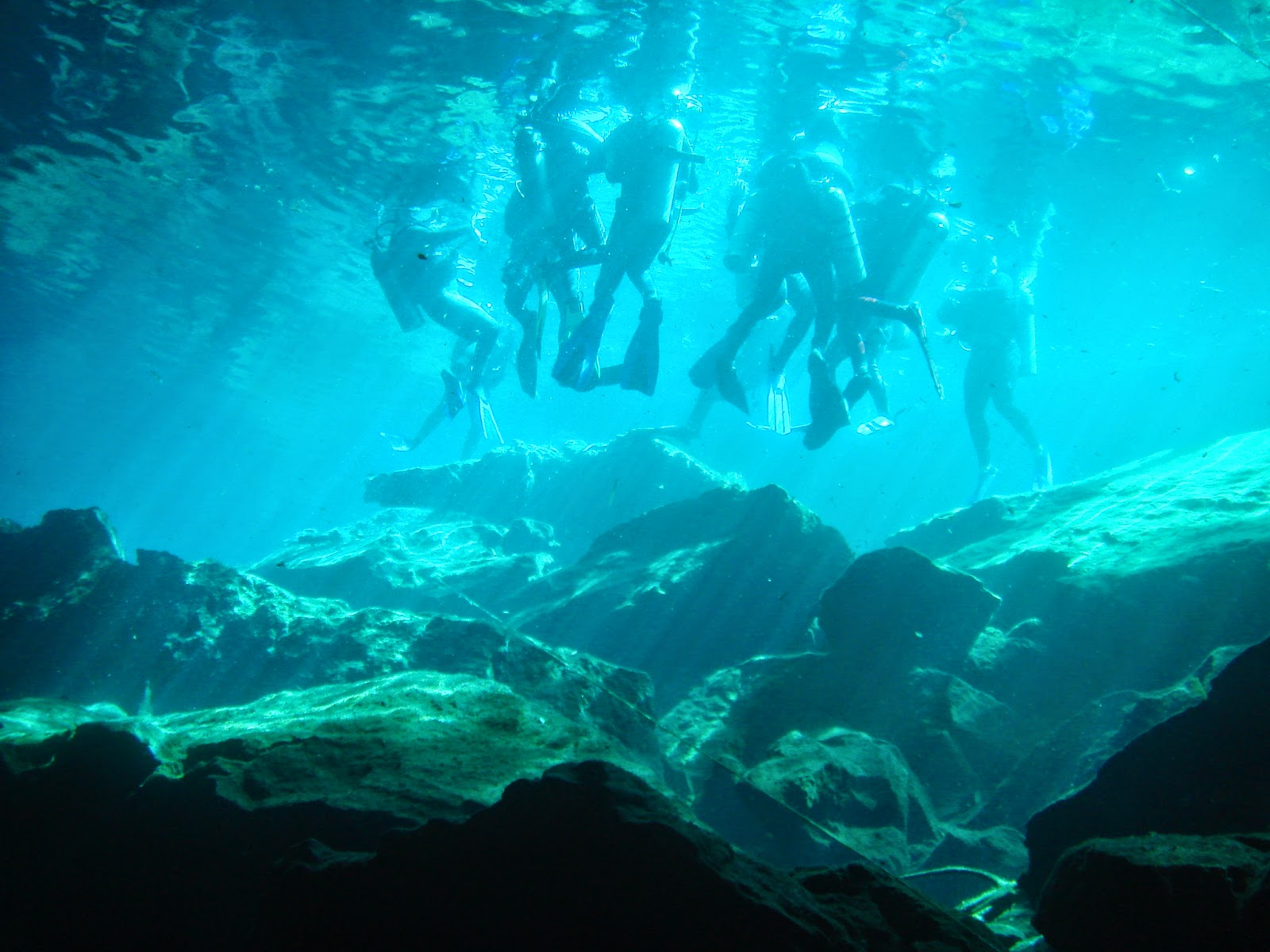 There is something a little bit special about diving underground. Whether it’s in and out of a broken reef, swimming through a well in a quarry or actually in caverns and caves it does make the heart beat a little faster the first time you look and realise safety is not in a direct line straight up!

We did our cenote diving during the second week of our Mexico expedition, this time based out of Playa del Carmen. Each morning we’d head out from the hotel, along the highway until we got to some secluded dirt track which just seemed to disappear into the jungle. The different cenote sites all looked surprisingly similar on the surface, essentially just a clear area, with parking between the trees, sometimes some tables for kit and maybe even somewhere to get a drink and some food. 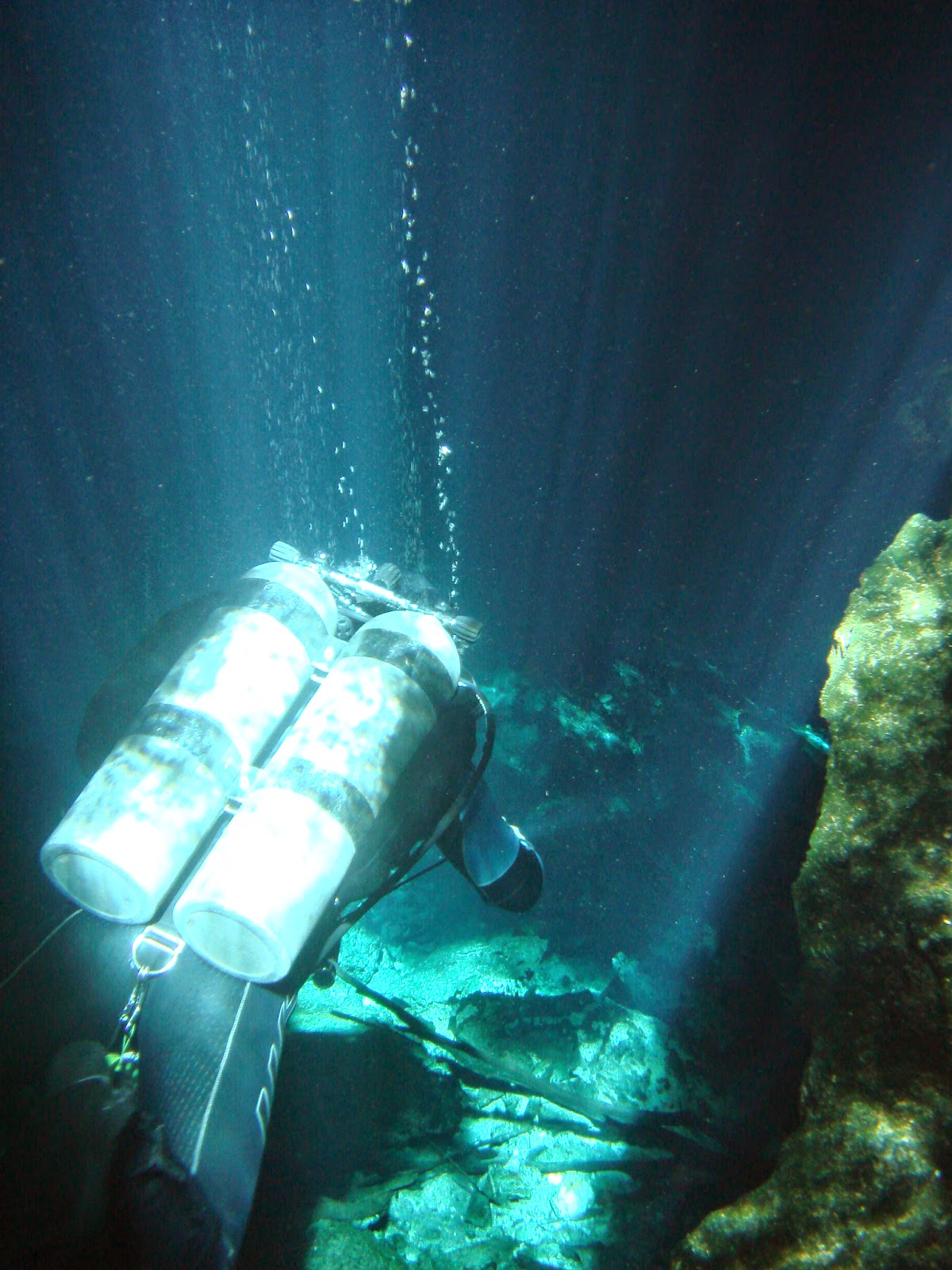 The diving itself was actually cavern diving as we never went more than around 30 metres from an exit to the surface and much of our dive was conducted at around 10 metres or less.  This made our buoyancy and trim really important but also gave us some spectacular photos of the light shining down into the caverns in every colour imaginable, from bright white through to deep red.

Our guides lead us, single file, through stalactites and stalagmites and dipping under and over haloclines, occasionally with temperatures of 10 degrees difference. We surfaced into some spectacular caves, where tree roots had pierced the rock above and hung down to drink from the cavern waters.  Bats got quite perturbed by our lights and in some areas we came across entire roof collapses allowing us to see the jungle above. 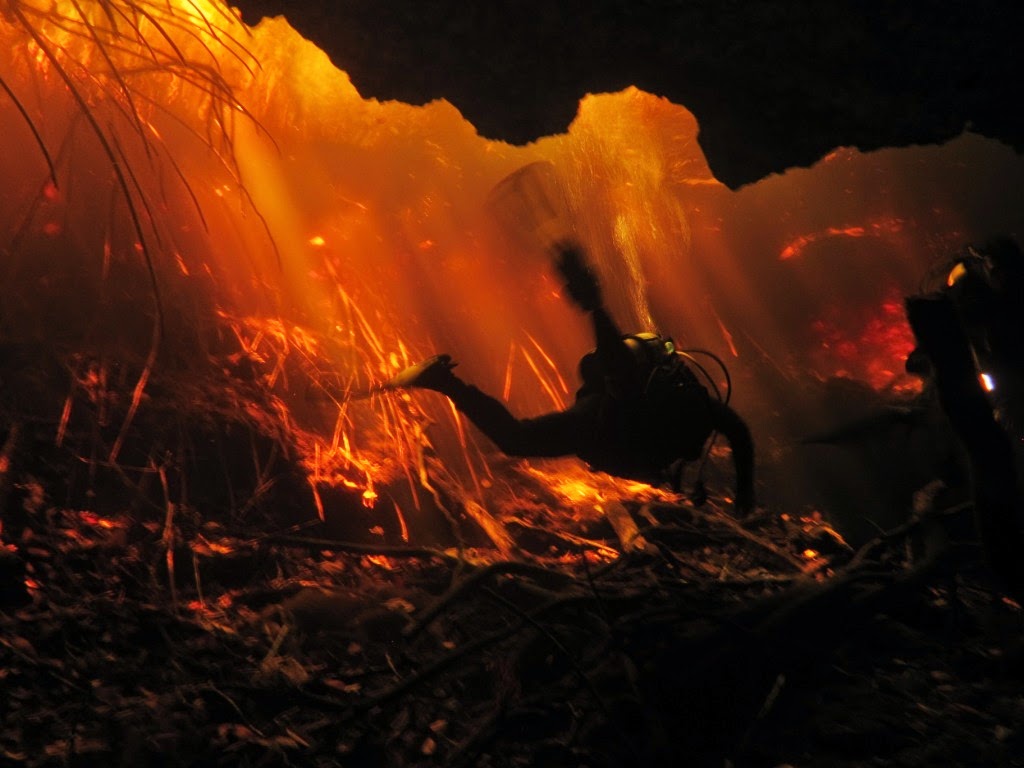 We dived caverns called the Dos Ojos (Two Eyes), Chac Mool, Kukulkan, Ponderosa (yes just like Bonanza) and the Tajma Ha and although we were never that far from the surface at times it felt like we were the first ones to ever see these spaces. The other surprising thing was how different they all looked. One might have great clear cathedral-like caverns, another had stunning light beams. This one had thick vegetation on the water giving it an orange or red glow while that one twisted and turned through tunnels and channels.

I know that this type of diving isn’t for everyone, some find it sterile and absent of life, others get fixated on the ceiling above but I think everyone enjoyed the experience of doing it.  There are some who will continue to dive underground and see just how far they can get and others who will look back and think ‘not a chance, never again’. But for all that, no one who did this trip will ever forget it.

Thanks Jill and Ken for a fantastic trip and a host of memories.