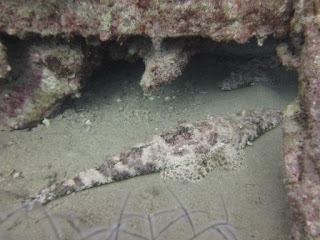 Final dive on the Thistlegorm this morning and what a dive it was. There was a slight current which apparently explained all the larger fish around today but we had Tuna, big Batfish, Jacks and Tevallys. It was just jammed packed and even the Morays were in good form. Barry found a couple of Crocodile fish sleeping under a coal wagon and there was a very large black and red Lionfish as well.
I now feel like I have at least visited the Thistlegorm.

Came up and had breakfast and now we’re off to the Kingston on our way back.

The Kingston was a nice wreck, very battered and covered in coral but with just a bit too much swell which was tiring everyone out. We spent about 15 mins on the wreck then headed out along the reef towards the mothership. This was quite a nice drift with plenty of sealife and some enormous table corals. We stayed at about 10-12 metres for almost the entire time and ended up almost halfway back to the boat. 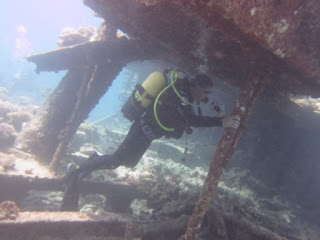 Only 3 dives today and the third was a choice between the Liveaboard Emperor Fraser and the Dunraven. Joe and I decided to do the Dunraven because after seeing the pictures of the Fraser it was pretty stripped and battered so more of a novelty dive than anything else. 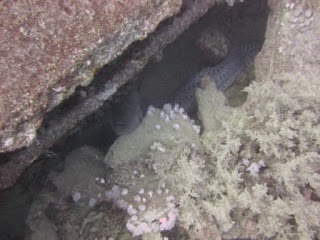 When we first dropped in the current was headed away from the boat rather than back towards it and this meant we got pushed towards a group that we followed for a bit before they explained that the wreck was the other way. We finned for a bit and then found it and had a good swim through the upturned hull and out the far end. We saw some big Napoleon Wrasse and then swam round the stern and the prop to be met with a lot more current so went over the wreck and back inside for a rest. I got a bit of a shock as a Giant Moray decided to free swim right past me and the first I knew was when I saw the tail pass me. I spun round to see what it was and this head just looked at me from about half a metre away but seemed a lot closer. Then we started to deploy the DSMB but as we did a couple of big Napoleon Wrasse turned up and then another Moray. I dropped down to take a picture and then ended up surfacing with only 20 bar. Note for next time.

Dinner this evening was a traditional Sunday Roast although with stuffed Aubergine, Courgettes and Peppers. Fantastic as always.
Posted by Brett Parker at 02:21