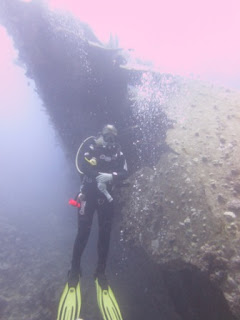 Got a lie in this morning until 7.00 before heading out to Kimon M for an early morning dive. There was a really big puffer fish in situ which was great until I realised that my camera was in the case upside down so I couldn’t use it for the whole dive. Such is life.

After swimming through to the stern and finding the propeller we swam along the outside until we could penetrate into the holds and have a good rout about in there before coming back onto the deck plates and generally enjoying the wreck which was in quite a good state.

Back for breakfast and then to our last dive on Abu Na Has which was the Chrisoula K. This was a really beautiful wreck although when we arrived there were quite a few other boats around the area which made it a bit cramped but once we were on the wreck it was fine. Some great swim throughs and we made our way from above the prop along a companionway surrounded by granite tiles to the hold then up onto the deck and through the kitchen. Once we got to the kitchen we found a couple of hatchways down which we took and the followed the companionway along to the engine room. This was dark and tight for space but really atmospheric and we got some nice shots of the engine and equipment before coming back out and heading forward to the bow hold and found another swim through to the other side of the wreck. We had a look around the masts and I managed to squeeze through the funnel and then it was time to go home. 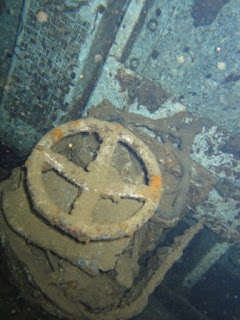 Once we were all back on board we were off to the next site and lunch was served. I don’t know how they do it but with a tiny kitchen the food is brilliant.

Afternoon dive was The Barge which is little more than a shell on bottom but absolutely thriving with life. More life on this one wreck than we had seen so far put together. We got to meet first Georgina and then George, two Giant Morays who lived up to their name. Georgina had taken up residence in the bow and George was further down the wreck but as we swam up he was so big and still it looked like one of the ribs of the barge. We also saw a couple of other morays and plenty of Scorpion and Crocodile fish. At an average of 10 metres we got to stay on the wreck for about an hour before we headed back but we still managed to miss things. 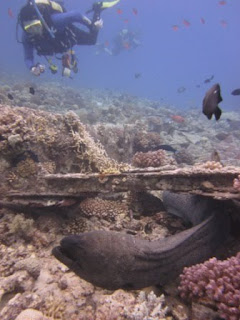 Our night dive today was also on the Barge and learning from last night we went in about an hour later so it was properly dark when we hit the wreck. Again it was amazing to see so much different life at night however it started to get a bit busy after about 15 minutes so we headed out over the reef for a bit of space. The only trouble we had was finding the strobe for the descent line as one of the groups from another boat all had strobes on and between those and the number of torches flashing everywhere it took a little while to find our boat.

Tomorrow we’re off to the Rosalie Moller for the day.
Posted by Brett Parker at 00:26