Swanage Weekend - bring your own weather!

As this was such a group effort for all involved, rather than telling the story myself I decided to ask some of the folks on the weekend for their contribution.  The result may be quite long but stay with it as it really is a snapshot of what people got out of the trip.  All told it was a great trip and I'd just like to thank all those who took part for making it worthwhile.

Next time I might edit it a bit but on this occasion its live and unadulterated. 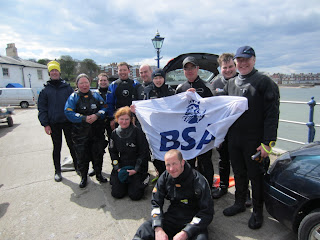 
Having arrived early Friday evening we dropped off our stuff at the B&B and walked for a good 2 minutes to a handy pub. There we met most of the rest of the group for a couple of beers and something to eat.


Saturday morning started pretty early (for drivers – passengers got to have a nice lie in), with memories of the August pier queue.  However I found that I was fourth in the queue and Brett was second. I might have stayed in bed a bit longer…  Once the pier opened we moved our cars on and returned to the B&B for breakfast, Brett gate crashing our B&B.


After a unhealthy breakfast we all wandered back down to the pier for a 9am ‘ropes off’. Being assistant dive “manager” I got to have a clipboard equipped with soon to be damp bits of paper and a pen and the pleasure of hassling everyone to tell me how much air they had.  By the second dive I was asking people to remember how much they had started with so I could write it down after the dive.


We all kitted up and dragged our kit up close to the boat. It might have been better to do that in the other order. Then the time came to get the kit on the boat, find a space and head on out. The briefing followed a little way off and then we were heading out to the Valentine Tanks. At this point we all needed to get our kit on and sorted, at the same time as writing down the air, times in etc. Richard followed me in and to the shot managing to neither be left behind or land of my head, which was a bonus. Down the line we went and had a good bimble about - finding the resident conger hiding under the tank – then moving on to the other tank along the line between them. Vis was ok but not startling and we did meet some traffic coming the other way. After another bimble we returned to the first tank had a bit more of a look and went back up the shot after about half an hour underwater.


Once back on the surface we go back on the boat feeling pretty happy that all had gone well and having had a nice dive. Now Brett and various others were not looking so happy. Colin had had his shiny new regs dump all his air, meanwhile Brett’s camera had gone awol and Jane had lost a weightbelt. Many turned down mouths… The skipper tells everyone to leave a note with the shop in case anything is found another day.
The weather had taken a turn for the worse overnight and so the other divers due to be on Spike between our two dives had been cancelled. This gave us the luxury of leaving our kit on the boat while having a bite to eat and warming up a little and getting fills.
The second dive was the Peveril Ledges drift, which was much better than in August. We stayed on the rocky stuff most of the time, seeing a few crabs, a dog fish and the odd lobster. There was a reasonable tide and a good time was had by most of us. This time I really did get people to remember their air in and then collected up air in and out afterwards. The weather was getting a little bit more weathery by now. With something of a wind and a slight chop having made the lift a bit more of a game.


After we were back on the pier a hardy few went in again almost immediately for the benefit of ticking of skills. We finned out to the pier with a plan to swim along the piles and do some exercises down the end followed by some towing back to tick off rescue skills. However the vis was comically poor. Navigation was by following the shadow of the pier – bright green being to far right, dark green too far left and black being when you bang your head on a pile. Nobody was going to be able to tell whether there were any trainees there, let along whether they had cleared their masks etc, so we gave up and returned to the steps being towed by now somewhat cold trainees.
Out we got, finally getting dry and warm, filling up with air for the morning. Next back to the B&B for a rest followed by an evening of food and beer.
Day 2 - Chris - Assistant Dive Manager for Sunday

After arriving on the pier early to secure the best parking spots (and being the first group on the pier for 2 hours), we kitted up and boarded Spike for a dive at the Fleur De Lys. With the sun out today, those of us in semi-dry and wetsuits didn’t suffer from the cold quite so much.

The Fleur De Lys is fairly broken up at a depth of around 13-14m and gave the chance to get some distance line practice in. Some chose to exit following the shot line at the wreck and a few of us moved away and explored the surrounding seabed exiting on a DSMB.


For the second day running we had the boat to ourselves for the day, so after a quick return to the pier for air fills we set off around the bay to do a drift dive called ‘The Lighthouse’. At a depth of between 10-14m (although the skipper mention mid-twenties which were not to be found this time) we all descended and drifted for around a mile exploring the rocky ledges. Several people sighted crabs, lobster and Ken found a golf ball. Most importantly Victor reached his hundredth dive. 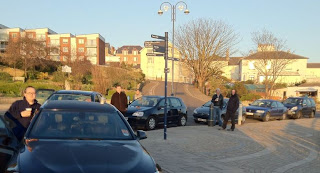 After de-kitting and finally getting warm again, the weekend was finished off with fish and chips!

Elaine and Alan - 1st Bermondsey Dive and 1st UK Sea Dive
Alan and I were very excited on our first ever dive with the club this season, and set off for Swanage bright and early at 3.30am on Saturday morning. We aimed to be queueing for a carpark space at 6.30am only to discover our first hitch at 6.15am when we realised that our sat-nat has taken us to the Sandbanks ferry crossing (which was shut at this hour)! Off we went the long way round finally breathing a sigh of relief and arriving around 6.55am.


Having borrowed some "semi-dry suits" from the shop (which seemed to us to be 7mm and 5mm thick 2-piece wet suits! As we managed to fill up the suits with cold water as soon as we jumped off the boat J Awesome!) we set up our equipment and went on our first dive at Valentine Tanks! There are two tanks linked together by a rope underwater and although visibility was not great, we saw some sea life that was completely unafraid of us! Oh yea, we spotted a large conger eel under the tank! Its head was at least a metre in length where Alan tried to poke its head with his BARE HANDS!!


Unfortunately the lack of sleep, cold and seasickness caught up with me so I didn't do the rest of the dives in the afternoon, opting for a really long hot shower and a really nice nap in a really warm bed. Alan did say however that he enjoyed being the "victim" for the peer dive helping to train the ocean divers,and that he had caught a huge crab with tiny claws on his drift dive only to put it down to try and grab some scallops and realising that he had drifted too far away to grab the crab floating halfway in the water again! (He has now vowed to get a bag for his hauls on drift dives so nothing can escape!)


On Sunday we had a good night's rest, lovely full English breakfast at the B and B and went for the Fleur De Lys, a sunken fishing boat. This was a chance to test our skills with a reel and unsurprisingly mine got stuck! Lesson learnt - bring a huge reel! Alan managed to go around the whole boat with Brett but he also vowed to get a big reel as it was a nightmare trying to wind back the small reel!!!!! The 8 degrees temperature of the water didn’t help at all!!


The drift dive in the afternoon was also very relaxing, where we spotted starfish, lots of rocks and weeds on the bottom and occasionally other sea life! I also learnt a lesson here, when your air is hovering at 160 bar after your first dive, don't play the fool and go re-fill it so that you give yourself the maximum time underwater! Alan got disappointed as he didn’t find any scallops nor edible crabs when this time Brett did have a bag with him!


My final thoughts - British seas are really choppy and cold! Next time we will be prepared with our brand new dry suits (Yes! No more wet AND cold feeling), probably some seasickness pills, actually bring the huge reel underwater and not the teeny tiny one, and we will try to get there the night before the first dive for some much needed rest!

Hope to see you there on our next dive together!

I must of experienced every emotion & feeling over the course of the weekend, lows & highs; failure, disappointment, achievement & accomplishment. Worry, stress, panic, confusion & why?! Calm, peace, tranquillity, enjoyment & utter adrenaline! There were occasional frowns, even a grumpy outburst or two, but plenty of smiles :-) Looking back, the odd chuckle too. Would I do this again? Absolutely, it was AWESOME & I can't wait for Eastbourne & The Great Diving Getaway! Special thanks to Brett & of course everybody else.
Grant - 1st Sea Dive