Four members from the branch (myself; Brett; Ken and Eddie), were joined by 5 members from other BSAC branches (Dave Porter from DAGSAC; Serge Weinstock from Clidive; Mike Tonge and Cat Burgess from Hellfins; Mary-Ann Craig from BSAC Direct) to dive Scapa Flow and the Outer Islands over the diamond jubilee weekend……


We all travelled up on the Friday, with a stay overnight in Inverness, with the final leg to Scrabster to catch the ferry to Stromness.
I was picked up at 5.00am Friday morning by Brett in the car. The planned estate car was replaced with a saloon car, so some economical packing was required. Fortunately we were hiring cylinders from the boat, so both space and weight was saved, but with two lots of dive kit and luggage the car quickly filled up……, and we still needed to pack one more passenger. 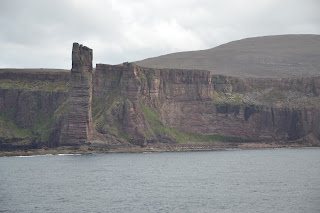 Arriving in North London at 5.45, we picked up Mary-Ann, who fortunately packed light, we got everything in the car and headed north up the M1; M6 and M6 toll; so by 9.00am we were near Manchester.

With a rotation of drivers, we arrived at the Tullibardine distillery halfway between Stirling and Perth at 13.15 with a tour booked for 14:00. It really didn’t take much discussion before a “trip” bottle was bought…!


With a scenic tour via Fort William we arrived at the B&B in Inverness a little after 19:00.


The Saturday morning, following a hearty Scottish breakfast, we all set off to Scrabster….!
Arriving in Stromness at 13.00 on the Saturday it was a short drive to the MV Valkyrie, rated one of the best liveaboard dive charter boats in the world. Luggage loaded and kit assembled; we were ready to go! 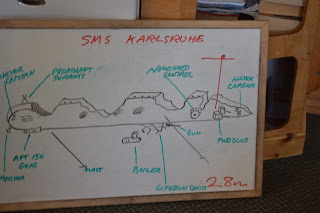 A light cruiser of the Konigsburg II-class.  It lies on its starboard side and was in approximately 28m metres of water. Visibility was very good being in excess of 10m. Much of the ship has been damaged by salvage operations with several salvage breaks, but the remaining parts still contain many interesting features with an intact stern section complete with anchor capstans and the anchor. 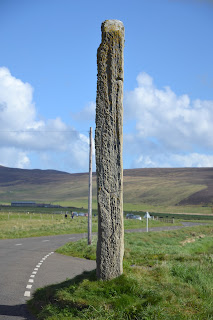 F2 and YC21 barge –This dive consists of descending the shot line to the YC21 barge that was used in salvage operations which sank in a storm in 1968, which while significantly smaller was almost more interesting. With easy penetration to the cabin, a frame that contains part of a mirror is still mounted on the wall. The holds still contain a gun salvaged from the F2 as well as also containing the winch engines and a generator.  A line across the seabed takes you to the F2. The F2 was a torpedo recovery vessel and never really took part in any action and isn’t part of the German fleet that was scuttled, it sank in 1946. The boat lies on its port side in 18m of quite cold water. Visibility was very good being in excess of 10m. The wreck has also been extensively salvaged around the stern. Unrecognisable wreckage lies strewn all over the sea bed. The bridge structure is quite intact and the mainmast still lies across the seabed. On the foredeck there is a well preserved 4 inch gun turret with its breech mechanism exposed for inspection by the interested diver. Anchor chains are clearly visible as are the paraphernalia of cleats and capstans.


The afternoon saw us off exploring some of the Neolithic heritage with a long walk from the Stones of Stenness, the nearby Neolithic  Barnhouse settlement discovered in 1984 and then to the large diameter Ring of Brogdar…. 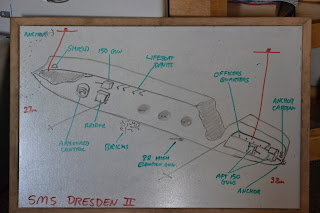 Lying on her port side the seabed was at 27m at the bow and 38m at the stern she rests  on its starboard side, it is almost intact. With both a stern and bow shot line, we descended the shot line on the stern, which was attached to the rear guns near the officer's quarters where even the bath is still fitted.


The hull itself is relatively intact apart from salvage damage around the engine room, with the bridge structure still intact. At the bow, the shield (which would have been painted) is still attached to the hull just at the bow.


Seydlitz debris field - The Seydlitz was fully salvaged, but debris remains over the depression where the ship lay. However a current saw this change to a drift dive which took us away from the wreck site, although we did come across the searchlight irises and the ship’s anchor.


The afternoon of Monday saw us off to visit the Maes Howe, a spectacular Neolithic chambered cairn built with layered stone slabs. Built some 5000 years ago it is older than the pyramids of Giza and Stonehenge. It was occupied by the Vikings in the 12th Century as a shelter from a storm, where they carved “kilroy was here” type graffiti in their native runic writing. 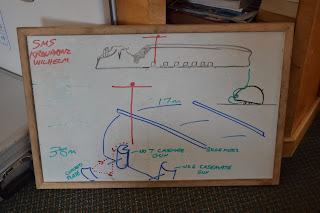 One of the large Konig-class dreadnought battleships of the German Fleet that fought in the Battle of Jutland, it settled virtually upside-down on its starboard main deck in 38 metres of water. Much of the superstructure is buried in the seabed.

This wreck is enormous! Her hull, however, is relatively smooth and uncluttered. To get the most from this wreck you must get to the sea bed and work on alongside or in by descending off the port side of the hull. With about 4m between the port deck and the seabed this dive is not for beginners!

Along the gunwales are the casemate gun turrets - 7 per side. Although many are badly broken the forward two are still relatively intact.


Our dive was cut short when my 2nd regulator decided to provide 75% sea water with every breath.
SMS Brummer – A mine laying cruiser this lies on its starboard side in 34 metres of water we descended the shot line and then headed towards the stern.  The salvage break allowed entry into the coal hold.  Proceeding towards the bow another swim through along the mine tunnel with an exit hole.  With 25 minutes deco racked up, we ascended back up the shot line with total time underwater of 68 minutes. 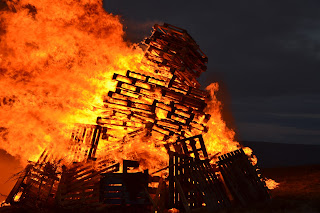 Day 3 also saw the lighting of the Stromness Jubilee Beacon on Brinkie's Brae, the hill above the town. It was a bitterly cold evening, but warmed up considerable once lit. The evening ended with a beer in the pub. 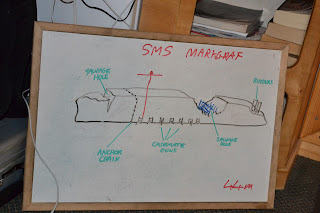 Another of the dreadnought König-class battleships and was lying in 44m to the seabed almost upside down on her port side.


My second dive of the day was aborted soon after jumping in with a free-flowing Octopus that wouldn't stop.


SMS Coln
The Coln is relatively intact light cruiser and sister ship to the SMS Dresden, with a single salvage break towards the stern. The shot line was attached to the lifeboat davits, and immediately went forwards where a large hole in the hull plates near the bow lead to a long swim-through. The armour control tower was evident along this route, where you could either go over or under the tower. Going under would be a far more dangerous penetration, so passing over the top we exited the swim through near the lifeboat davits where we started.  Proceeding to the stern past the salvage break aft guns were evident.


SMS Brummer – Weather was now playing a significant part in determining dive sites, with some really not diveable because of the sea state, hence a return visit to the SMS Brummer

F2 and YC21 barge - The weather was quite stormy, and while the original plan was a return to the SMS Dresden, the sea state was too rough, we reverted to the more sheltered site of the F2 cruiser and YC21 barge.
The second dive of the day was called off due to the weather, so Plan B was put into operation – The Pub!


The end of Day 6 saw Brett, I and Mary-Ann, heading off to Kirkwall to catch the midnight ferry to Aberdeen, where with a berth booked we woke early on the Saturday morning to drive the long road home......
Posted by Kim Thomas at 07:08