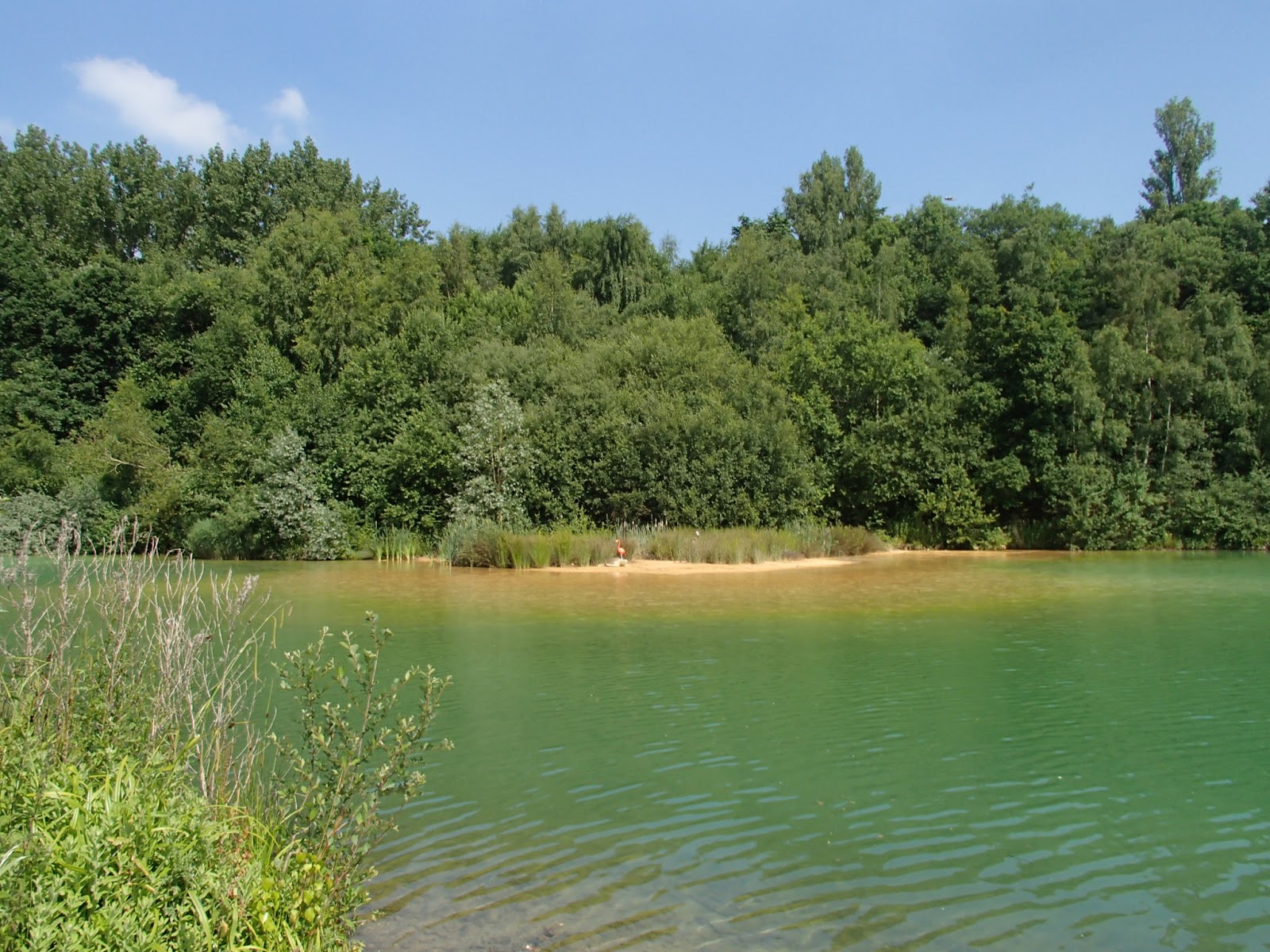 by Jörn and Ishka

We arrived at Diver’s Cove about 10am Saturday morning, slightly delayed due to heavy traffic on the M25. The setting of the recently opened facility, a former sand quarry, was very beautiful and the weather played along nicely. The wooden building on site encompassed a dive shop/equipment rental, a small café and changing rooms. Two porter loos, always appreciated, were also on site. 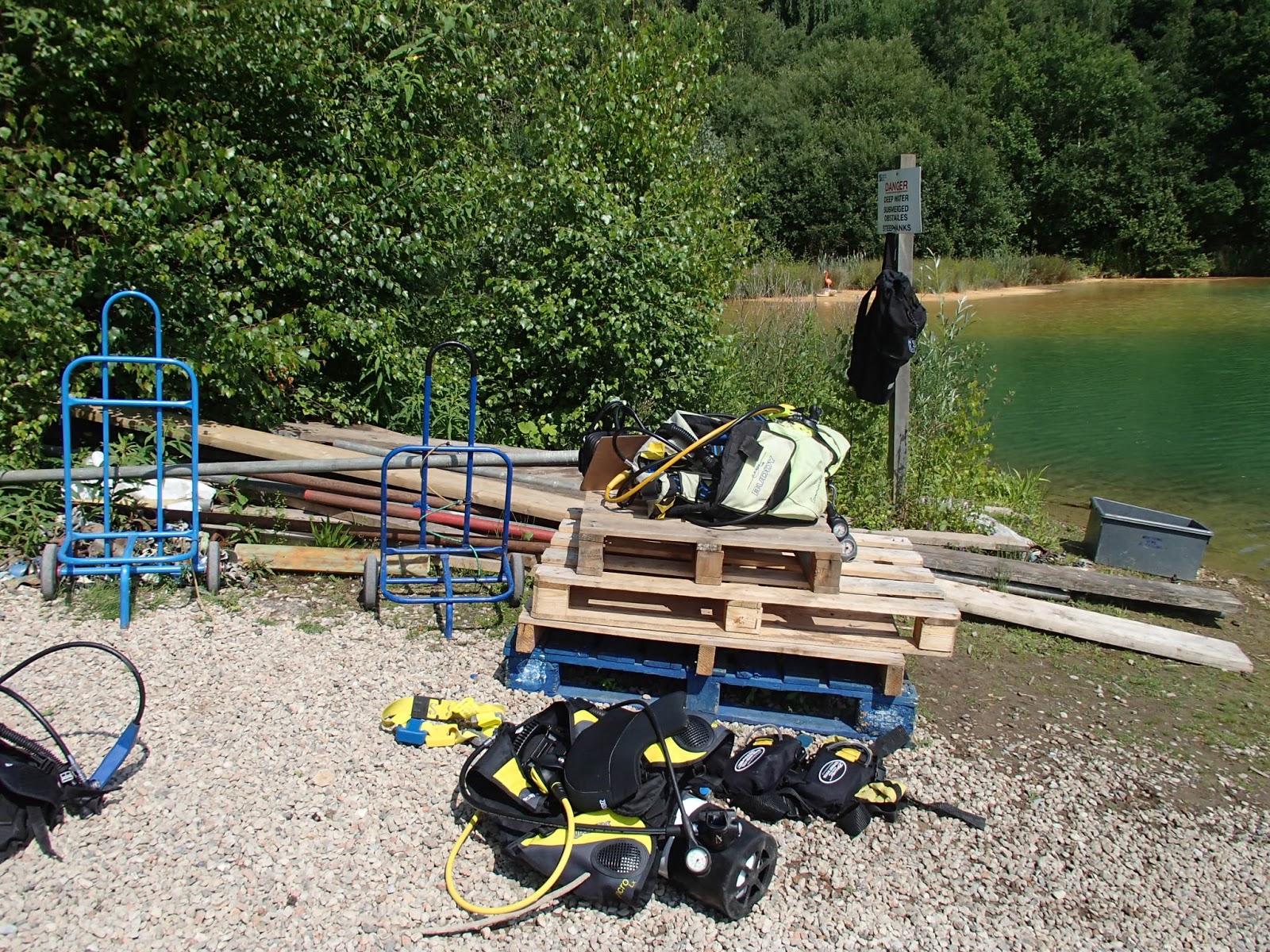 After assembling our kit and the pre-dive briefing by Lee we descended to the lake itself via a small gravel path, which had formerly served as the access road to the quarry. The provided trolleys turned out to be extremely useful for transporting our kit down the slope. At the edge of the lake, and under the watchful eyes of a plastic flamingo as well as what appeared to be a logger-head sea turtle, we finished kitting up with the help of Sally who also kindly managed the clip board for the day. 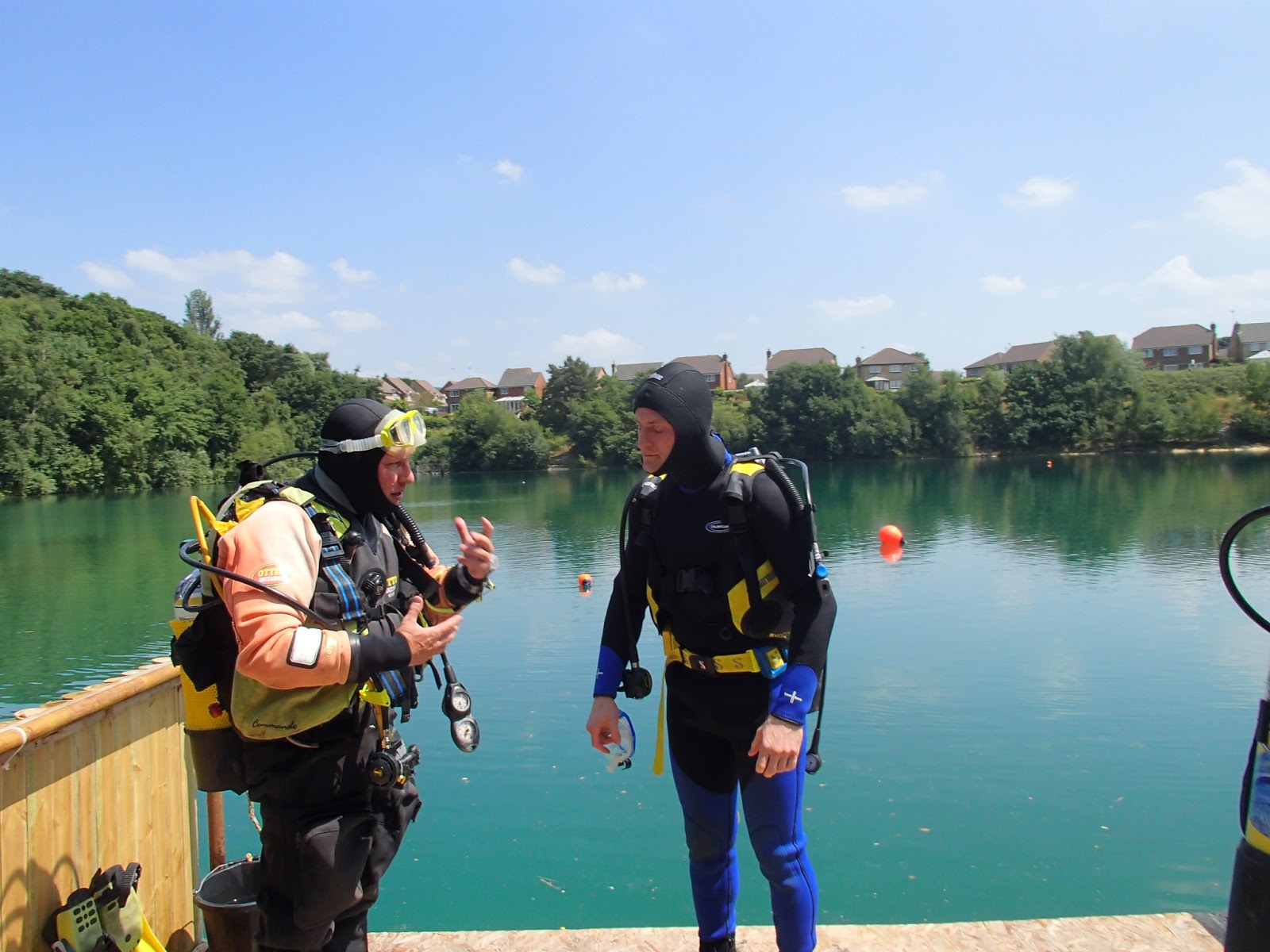 Excited about finally hitting the water (it was rather warm in the wet suits at that point) we followed Clive into the lake, slowly wading into the water backwards and then made our way on the surface to the nearest buoy, which also marked the location of a wooden underwater platform at the depth of about 5m. We descended, in a controlled fashion, down the shot line and finally arrived at the platform where we then commenced with various exercises including; buoyancy, mask clearing and what can only be described as an underwater handstand (the significance of this particular exercise remains enigmatic to these Ocean Diver trainees). 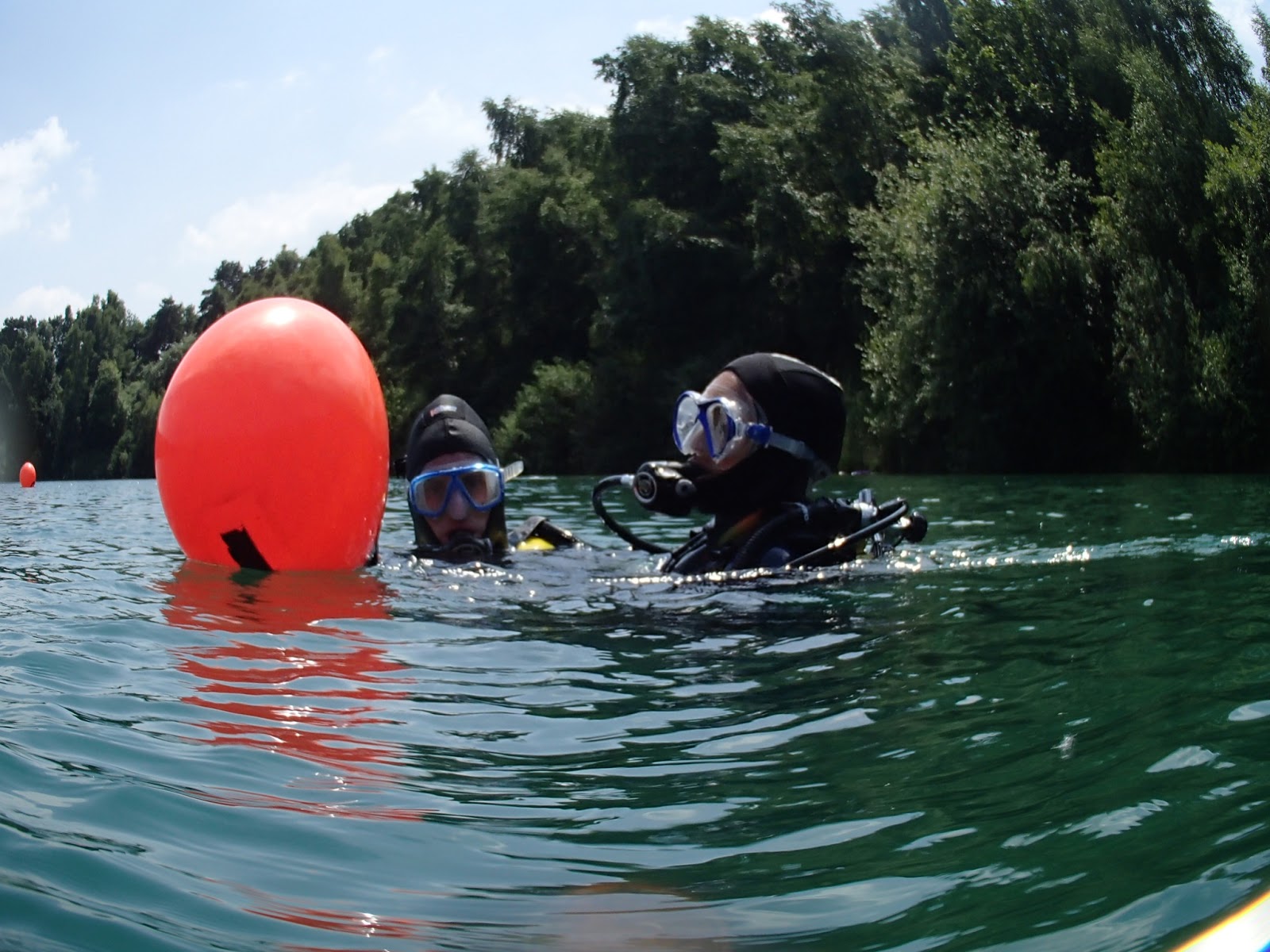 Following our instructor Clive through the murky water we continued towards the middle of the lake, encountering a number of submersed trees and creepy looking theme park figures. While we were extremely lucky with the water temperature which was said to be 21C at the surface and 17C at the bottom, visibility was at times problematic due to large amounts of silt our fins had disturbed at the bottom. However, we eventually arrived back at our “precise” starting point at the beach thanks to Clive’s superior underwater pilotage skills.


After a surface interval of about 45minutes, during which we enjoyed the warm sun, we started our second dive entering the lake with a giant stride from a wooden platform. 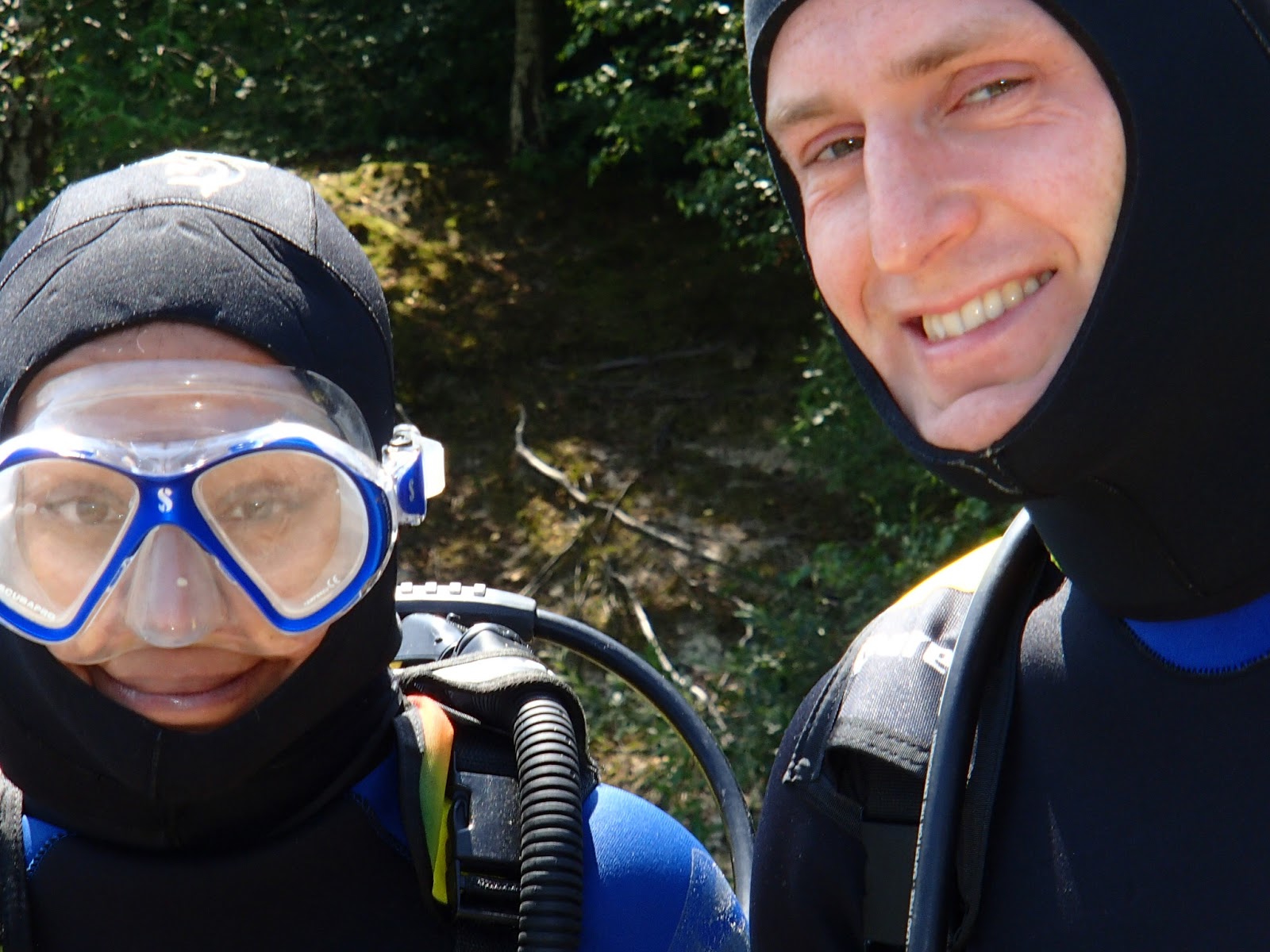 Again, we descended to a platform for further skill practising, which among other things included detaching and re-attaching the direct feed to the BC. Thanks to Clive’s nifty underwater Olympus camera we also had some pictures taken. We then set out towards the other side of the lake descending through the thermo-cline to an impressive 7m (it was freezing!!!). Noticeable underwater features this time included a discarded motor cycle, underwater vegetation of sorts, tad poles of varying sizes and a large number of golf balls (one of which now resides in our living room). Our final exercise of the day was a demonstration of the usefulness of the weight belt, carried out in shallow waters, which entailed taking off the weight belt followed by complete loss of buoyancy control. An Ocean Diver trainee, who shall remain unnamed, accidentally dropped her weight belt into the silt but luckily Clive came to the rescue retrieving the belt.


We ended this fun dive by returning to the beach and de-kitting followed by a de-brief over a well deserved coffee.
We would like to thank Lee for organising the trip, Clive for providing our training and Sally for giving us a ride and her help and support throughout the dives.