Four of us (Chieko, Colin, Jane and Lee) went for a week’s diving in Gozo, the second island of Malta (well Lee was there just until the Wednesday) in mid-October. The weather was warm, and the sea sufficiently so to require only 5mm shorties.

We stayed in a basic B&B in the village/small town of Marsalforn on the north coast of Gozo, and dived with Gozo Aqua Sports. Our dive guide was mostly Matt. Apart from the sea life much of the interest is the fascinating rock formations found under water, creating natural gullies, chimneys, caves and arches. 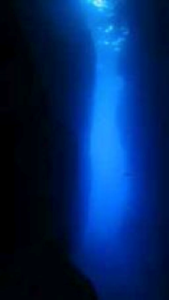 For most of the week, dives were constrained by which way the wind was blowing, limiting the availability of sites. All the dives were shore dives, and the first was on the south coast at a place called Hondoq, a nice relaxing check dive, no deeper than 13m, mainly over sand and sea grass, most memorable for an excellent view of a small stingray burrowing for prey in the sand. This was followed by a dive which, while of a similar depth, was in a narrow inlet with cliffs either side. It was therefore a sort of wall dive but without the need to maintain a constant awareness of depth, and there were also a couple of small caves to explore.

The following day we were a little more ambitious and dived the top 25m of a pinnacle, with a large number of fish feeding on the algae and other encrustations on the pinnacle with jacks just of the site in the blue. The afternoon was the Inland Sea, one of the classic dives in Gozo. It is formed by the intrusion of the sea through a tunnel, creating a shallow lake which one crosses before submerging and swimming through the tunnel, taking care not to be run over by the boats taking the sightseers out to sea to see the Azure Window.

A wall dive with lots of incrustation and other life is found to the left of the exit, whereas to the right, as our brief foray showed, was much less interesting.

On the Tuesday we lost Matt, and Duncan took us out for the day. The first dive was the usual check out dive site for the centres based in Marsalforn, and which we had been unable to do on the first day because of the wind. Duncan had great pleasure in finding interesting things for us to look at and we had a very leisurely dive for over an hour including octopus, and an unusual scorpion fish generally found in deeper waters. 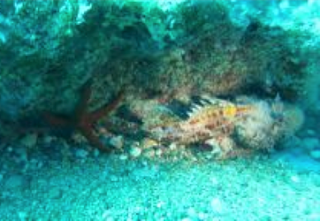 Unfortunately I managed to kneel on a fireworm and felt unable to dive that afternoon.  Everyone else went off to Reqqa, another of the more celebrated dives, often with excellent wildlife to see. On the Wednesday Lee left us to make his way back to the UK, journeying back to the airport on the local public transport.

On the Thursday Chieko had a day of rest, and just Colin and myself (with Matt) revisited the Inland Sea, only to find that we couldn’t park, so went to the adjacent site of the Blue Hole which is a dive through a wide chimney, out at the bottom and an exploration of the cave behind, under the Azure Window, round the promontory and back through a very interesting narrow and bendy chimney into the coral garden before exiting on the other side of the Blue Hole, which for me was one of the best dives on this trip. The afternoon was a return trip to Xwenjni Bay by Marsalforn.

On the Friday Chieko managed to forget her booties in the morning, so just Colin and I repeated the Pinnacle dive of a few days earlier. We were accompanied by a German couple, one of whom managed to run out of air, despite Matt regularly checking our consumption, which curtailed the dive a bit. We then tried the neighbouring site in the afternoon, to which Chieko had walked during the morning dive and had found empty. However, by the time we arrived in the afternoon there seemed to be a conspiracy of white cars occupying all the parking spaces, with no sign of any divers! Therefore after a bit of a further drive around because of various problems relating to parking and other access issues the three of us revisited Hondoq, and found the stingray again.