Today was the day of the Rosalie Möller. We came, we saw, we dived, we dived again and just for a giggle we dived once more. 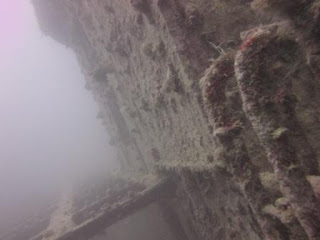 Sitting in 50 odd metres and sitting upright this wreck is a great deep wreck and that explains why we only did 3 dives today. Each dive was relativity short due to the depth and only having single 12L cylinders, but it was still great fun!

A stage cylinder was set up at 5 metres for those a bit short on the way back but it hardly got used. 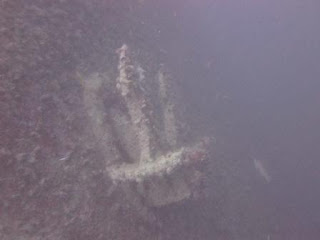 Joe and I decided that we wanted to have a look at the propeller which was supposed to be huge so we dropped over the side and worked our way backwards and down to have a look. I was really surprised that for a ship of this size the propeller did seem enormous. Then up over the stern rail and heading forward we dropped into the bomb crater and worked our way through the rear hold and then up to the bridge before rising up and then heading back to the stern line for the trip back up.

Second dive we swam round to the bow line and dropped down that all the way past the crow’s nest and then down to the fore winch. Our plan this time was to drop over the front, have a look around then come back and head towards the bridge. We found one anchor still in its hausepipe and got a couple of pictures of that before heading back towards the bridge. 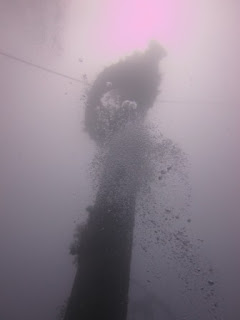 On the third dive we actually planned to do deco as there was no way we would get any real time to see anything without it. So the plan was to drop down the stern line and get into the guts of the wreck. Had a great potter through the kitchen with the pots on the stove and then through to the workshops and even had a look in the bathroom with the bath still in it.

On this dive Bill managed to get off the shot at the bottom with 1 minute of deco before even going anywhere!!

There is just so much to see on this wreck that you could easily spend a few days here doing 3-4 dives a day and still miss something.

After we all came up it was time to return to Gobal Island for the overnight stop in the lagoon and a few of the more adventurous (gullible) of us went for a walk around the sand dune, you can’t really call it an island. Saw a family of Ospreys that live there and the remains of an Egyptian punishment posting but the only other thing of note was the amount of rubbish everywhere, from coke and champagne bottles to light bulbs and plastic. After that it was back to the boat for cocktails and canapés!
Posted by Brett Parker at 10:03